WHAT IS THE PURPOSE OF A DRILLING MUD?

The purpose of a drilling mud can be broken into nine basic functions: 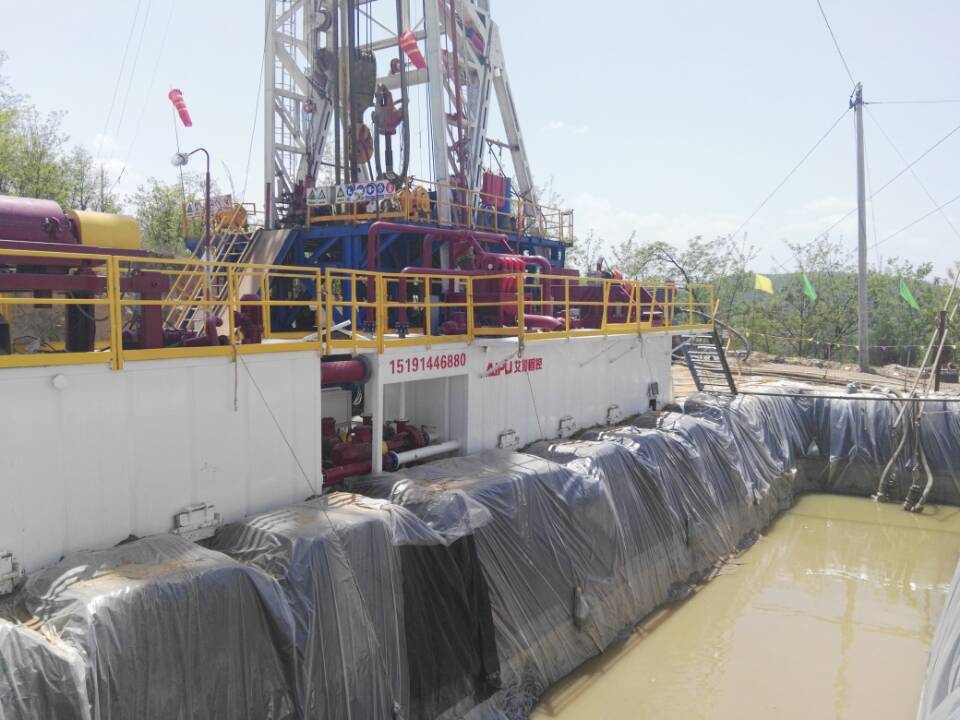 WHAT IS IN A DRILLING FLUID?

Commercial solids are those solids that are purchased from the mud company and placed in the mud to obtain desired properties to perform required functions. All commercial solids have a particle size of less than one micron with the exception of barite and LCM (lost circulation material). Barite particle size distribution runs from 1 to 74 microns as is indicated in Figure 1. Lost circulation material varies in its size; however, LCM is considerably larger than barite.

Drill solids are those solids that enter the mud in the form of cuttings or caving from the formations being drilled. Drill solids vary in their particle size from less than one micron to 1500 microns and larger. Drill solids are necessarily in the mud; however, their time in the mud should be limited to the time it takes to circulate from the bit back to surface. The composition of drill solids is, of course, the same as the composition of the formation being drilled or having been drilled earlier in the well. One of the most important objectives in drilling any well is to control the concentration, size, and type of solids in the drilling mud. Meeting this objective can eliminate many related problems through the duration of a well. This task is the responsibility of the people engineering the well, the operations personnel the drilling contractors, and the mud company. The cooperation and understanding of all of the above individuals is necessary to meet this objective. 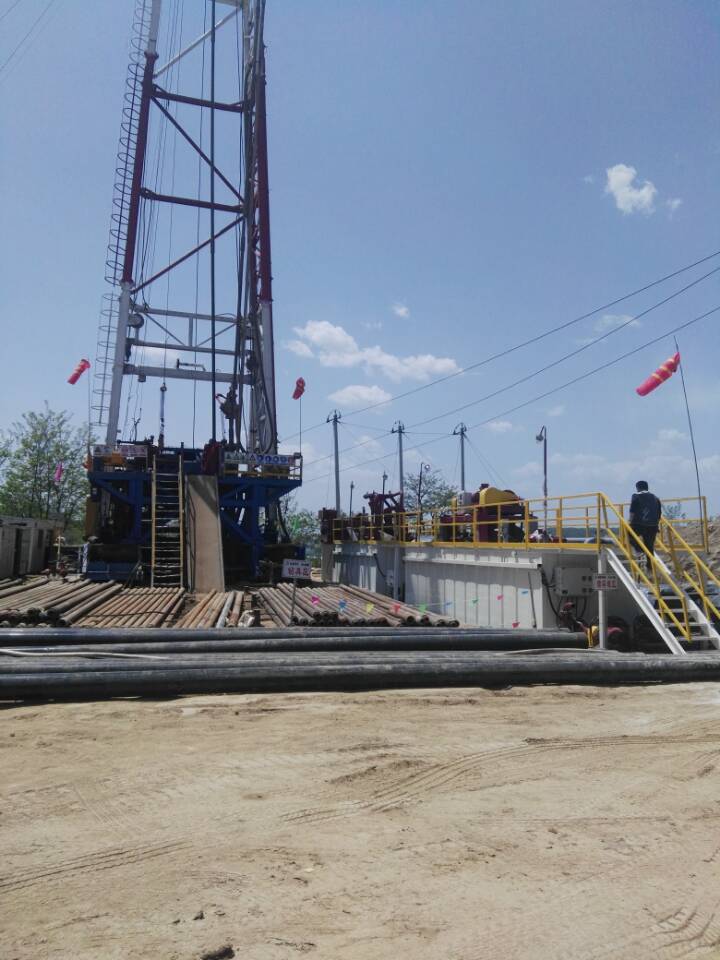 A few of any of these solids will not severely hinder the functions of drilling mud After all, it is designed to “carry solids”; but when the concentration of anyone type or size of solids begins to climb above its engineered level in the mud program, a problem is imminent. Also, if a solid is allowed to stay in the mud, it does not keep its original appearance. It may come out of the well bore at a size of 100 microns. If allowed to stay in the mud it will be circulated through the pumps, back down the hole, through the jets, and eventually will be ground into smaller solids called silt, clay, or colloids. Just one particle with a diameter of 100 microns will become 125,000 particles with a diameter of 2 microns, and it takes 50 times as much liquid to coat the surface of this same mass of drill solids. The solids concentration has not changed; however, the water or oil requirements have increased many times. This thickening process is known as viscosity and is one of the most ominous signs to be looked for. A solids problem can therefore appear without ever having an absolute increase in the solids concentration.

WHY CONTROL SOLIDS IN A DRILLING FLUID?

The potential benefits of controlling solids in a drilling fluid may be summarized in the following list:

Anyone of these ten items will more than pay for the cost in planning time and equipment rental necessary to minimize drill solids. The last two items are of primary interest to this group.

HOW CAN SOLIDS BE CONTROLLED?

Out of pure necessity the drill solids concentration in every drilling mud in the world is controlled to some degree. However, some of the techniques used are quite similar to the century old medical practice of “bleed-ing” a man that had an injury to get rid of the bad blood. Modern medicine says to give him a transfusion. Methods of controlling drill solids can be generally grouped into four basic categories:

Each of these methods has its place; however, dilution and jetting are used far too frequently when a little planning and a lot less dollars would indicate mechanical treatment to be more effective and more economical.

Each piece of equipment “works on” a certain particle size range, thus maximum benefit is obtained by allowing several pieces of mechanical equipment to work together to effectively remove a broad size range of solids. One piece of equipment will not take the place of another piece of equipment; however, the effective use of one piece of equipment might delay or eliminate the need for a downstream piece of equipment depending on the severity of the grinding effect and the specific size of the drill solids coming out of the well bore. It is important to remove the larger solids first so that the downstream equipment is not overloaded. For example, it is much more effective to remove one particle 100 microns in diameter with a mud cleaner than it is to attempt to remove 125,000 two micron particles with a centrifuge. Every mud system should utilize a fine screen shaker and a mud cleaner or desilter (depending on the value of the mud). With this mechanical equipment drill solids can be controlled on all but the most difficult wells. On these difficult jobs a centrifuge is needed.

All mechanical separation equipment employs mass differences, size differences, or a combination of the two to selectively remove undesirable solids and leave desirable solids in the drilling fluid. As pointed out initially, most desirable solids are quite small when compared to drill solids. If the majority of the drill solids 75-80 microns and larger can be removed from the drilling mud before making one comple”te circulation, the solids concentration can be effectively and economically controlled in all but the most difficult cases. The shale shaker, and the mud cleaner employ screens to remove drill solids. The desilter, desander, mud cleaner, and centrifuge employ centrifugal force to remove solids. All of these pieces of equipment can and should handle the entire mud flow except for the centrifuge which will process only a portion of the total flow.

All mud should be processed by the shale shaker when it comes out of the flow line. Ideally a fine screen shaker is used; however, even a rig shaker will adequately remove the larger solids realizing that drill solids missed by the shaker must be removed downstream. The following slides will show a standard and fine screen shaker. Basic differences in design, including amplitude and frequency of vibration, screen arrangement, screen motion, screen support, and screen opening will not be discussed here.

After being processed by the shaker, all mud should be processed by desanders and desilters or a mud cleaner. If an unweighted mud with a relatively inexpensive liquid phase is being used, desanders and desilters should be used. They will remove solids down to 15-25 microns. For the unweighted mud system, the liquid loss is not significant unless the cost per barrel is valuable such as with an invert mud or polymer mud. On a weighted mud system, the solids in this particle size range represent a significant cost in barite loss.

In the case of a valuable liquid phase or weighted mud system, the use of desilters and desanders becomes quite expensive. In this case a mud cleaner should be used to process the entire mud flow. Desilters are still used, but rather than discarding the entire hydrocyclone underflow, it is screened. In the case of a weighted mud, a screen with a hole size of 74 to 100 microns is used to allow the passage of the barite as well as the liquid. In the case of an unweighted mud with an expensive liquid phase, a finer screen may be used. It should be realized that in both cases some of the finer drill solids that were “desilted” out of the mud pass through the screen and back into the active system. The inability to remove these solids; however, is usually a very small penalty when the alternatives are considered:

The following slide will show a mud cleaner used today.

After being processed by a shale shaker and mud cleaner, both of which are operating properly, the majority of all drilling muds will be relatively clean. In the case of a well where,

It may be necessary to use a centrifuge to remove the fines (solids 3-5 microns and smaller). These fines were both generated at the bit and dispersed throughout the mud as it flowed up the well bore or through the grinding of larger solids that were not removed earlier in the well. If a centrifuge does not correct the problem, the other available alternatives are:

The following slide will show a centrifuge used on drilling rigs today.

The ideal rig-up of the solids control equipment discussed is shown in Figure 2. Note that the larger solids are removed first and that each piece of equipment completely processes all of the mud before it is allowed to flow downstream. No mud should bypass any of the equipment.

The following slide taken in several different parts of the country are indicative of the real presence of drill solids in drilling mud. They are supposed to be in the mud if you re making any hole, they are all size, and we have excellent methods of controlling them when the mud reaches the surface system.