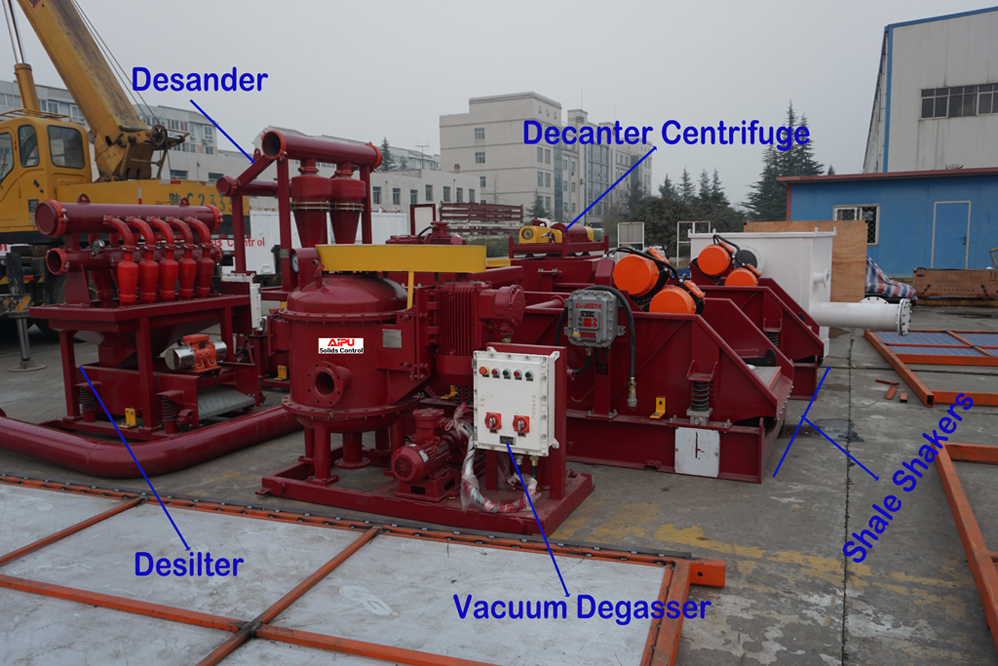 The shale shaker mechanically takes out the large cuttings from the mud. It does not however remove very fine cuttings and other small solid particles. These solids can be fine sand particles and other very fine materials often called silt. Good drilling practice requires removing these undesirable solids. If not removed, the solids can increase the weight of the mud more than required, reduce the bits penetration rate and significantly increase the rate of wear on circulating equipment. The rig uses mechanical solids removing equipment. Such as hydrocyclones and decanter centrifuges to remove the fine solids.

Sometimes the hole penetrates a formation that has small amounts of gas.

This gas gets into the mud becomes entrained in it and must be removed before the pump recirculates the mud back down hole. A degasser removes and trained gas from a mud. The shale shaker has rapidly shaker screens. The modern cuttings from the return line fall onto it. The shaker screens catch the larger  cuttings. These cuttings fall into the reserve pit, the sea or other container for disposal.

The liquid mud goes into the sand trap, which is a special mud tank. Shale shakers look simple, in fact, though shaker manufacturers carefully designed them to make the screens vibrate in a very controlled way. Sometimes the crew sends mud through a vacuum degassing. The degasser removes gas from the mud. If the gas were not removed, it could make the mud too light, not dense enough. As a result the well could kick. Formation fluids can enter the wellbore and have to be controlled to prevent a blowout. Another problem, if the driller recirculates gas in cut mud. The gas could cause the mud pumps to gas lock. Gas Locked pumps. Pump gas and mud instead of just mud which is highly inefficient. So, to remove gas in slurry. Crew members use a degasser. In a vacuum degasser, mud with gas in it (drilling fluid / mud), enters at the top and spills out over several baffle plates. A spreader spreading out the mud presents a large surface area for the gas to break out. Also the vacuum pump creates a vacuum, pressure lower than the surrounding atmosphere inside the degasser. This vacuum makes it very easy for the gas to escape from the spread out mud. The removed gas leaves through a vent which sends the gas a safe distance away from the rig. The gas free mud falls to the bottom and goes back into the mud tanks downstream from the degasser.

A hydrocyclone system consists of several cones. Mud enters through a signed opening at the large end of each cone. It swirls around inside the cone. This centrifugal force or cyclone motion throws the larger particles to the side of the cone there. The particles move to the bottom of the cone and drop out clean mud goes out the outlet. At the top a desander has large cones it removes particles as small as about 40 microns. A micron is one millionth of a meter which is very small.A desilter has smaller cones than a descender. Desilter’s remove particles down to about 20 microns.

A mud cleaner has still smaller cones. It removes particles down to about seven microns. Since barite that desirable solid which gives weight to the mud is also about seven microns. Screens are included on mud cleaners to retrieve the barite. So it can be returned to the system. Inside the cone mud enters from the side and spirals down. This movement flings the solids to the side. the spiraling action creates a vortex in the center somewhat like a tornado. It is an area of lower pressure. So the vortex sucks the liquid mud up through the center and out through the top of the cone. Meanwhile the solid slide down the side and out the bottom of the cone. The smaller the cone, the smaller is the particle it can remove but more cones are needed to handle a given volume of mud.

Crew members mount agitators on one or more of the tanks. Mud agitators 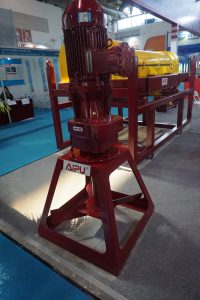 stir the mud in the tanks to keep solids from settling and to maintain uniform mud properties. One popular mud agitator is the paddle type. An electric motor rotates paddles to stir the mud. A pit volume totalizer or PVT alerts the driller to changes in the level of mud in the tanks. A float in each tank rises or Falls if the mud level rises or Falls. For example if the level rises the rising floats send a signal to a recorder and to a digital panel on the rig floor. The panel alerts the driller of the rise. This device is called a pit volume totalizer or PVT. Because it measures the gain or fall in each of the tanks or pits totals the gainer fall and sends this information to the driller on the rig floor. If the mud level in the tanks fall the PVT also alerts the driller. This float in a mud tank is part of a pit volume totalizer. Usually crew members install a fluid in each active tank. The floats rise or fall with the mud level in the active tanks. Mud level in the tanks is vital information. If the mud level rises, it often means that the well has kicked. Formation fluids have entered the hole and forced mud out. The cake fluids replace mud in the hole and cause the mud level in the tanks to rise. On the other hand, if mud begins going into a formation, if mud is lost to the formation, the mud tank level drops. Lost circulation can also be a serious problem. The decrease in height of mud in the hole could lead to a kick because hydrostatic pressure is reduced. Also drilling without mud returning to the surface is like drilling blind no communication between the bottom of the hole and the surface exists.

A hopper (mud mixing hopper) is like a big funnel. Crew members put sacks of mud material into it. They do not however use the hopper to mix caustic soda. The hopper(mud mixing hopper) can blow dry caustic back into the face of the worker mixing it. In addition to being dangerous adding caustic through the hopper can flocculate the mud, cause it to clump up. A crew member opens the sack of material at the top of the hopper and feeds the material into the funnel. At the same time a jet of mud from a centrifugal pump goes through a nozzle at the bottom of the funnel.
This jet creates suction. The suction pulls the material into the mud stream and thoroughly mixes it.