3. Filtration
When the hydrostatic pressure of the drilling fluid is greater than the pore pressure, drilling fluid invades the formation (spurt loss). Suspended solids attempt to flow in with the liquid fraction, but very quickly particles of the appropriate size (generally one-sixth to one-third the size of pore throats at the well bore) bridge the pores and begin to build a filter cake. In time, finer and finer particles fill the interstices left by the bridging particles and ultimately form such a tight web that only liquid (filtrate) is able to penetrate. Once this filter cake is established, the flow rate of fluid into the formation is dictated by the permeability of the cake. When mud is not being circulated, filter cake grows undisturbed (static fluid loss) and the rate of filtration after the cake is established is proportional to the square root of time. When the mud is being circulated, the filter cake grows to the point at which the shear stress exerted by the mud balances the shear strength of the filter cake (dynamic fluid loss). Under this condition, the cake has a limiting thickness and the rate of filtration after the cake is established is proportional to time. Often, spurt loss is greater under dynamic conditions. Whether static or dynamic, the particles that invaded the formation during the spurt-loss phase may or may not ultimately help to form an internal filter cake, too.
The API Fluid Loss Test (30 min, ΔP=100 psi through No. 50 Whatman filter paper, ambient temperature) is the standard static filtration test used in the industry; however, because it uses very fine mesh paper as the filter medium, all of the bridging particles are stopped at the surface of the paper and the spurt-loss phase is not simulated properly. Usually this leads to gross underestimates of the spurt loss. A better static filtration test is the PPT, or permeability plugging test, which uses a 1/4-inch-thick ceramic disk of known permeability [API 13B1/API 13B2]. Dynamic filtration, such as in the Fann 90 test, uses a core made of the same ceramic material and simulates shearing of the filter cake by the fluid in the annulus.
For a given pressure and temperature, cake thickness is related to the filtration rate and is a function of the concentration of solids, PSD, and the amount of water retained in the cake. Filtration rate decreases with increasing concentration of solids, but cake thickness increases. Permeability, on the other hand, does not change. Permeability is almost entirely dependent on the proportion and properties of the colloidal fraction (<2 mm diameter). Permeability decreases with increasing fraction of colloids and is affected strongly by particle size and shape. A broad distribution of particle sizes is important to attain low permeability. Particles that are flat (e.g., bentonite) can pack very tightly, in contrast to spherical, granular, or needle-shaped particles. On the other hand, some organic macromolecules, such as hydrolyzed starch, are highly deformable and appear to fit well in the interstices of most filter cakes. Similarly, polyelectrolytes like CMC (carboxymethyl cellulose) and PAC (polyanionic cellulose) are large enough to be trapped in the pores of filter cakes. In NAFs, colloidal control of filter cake permeability is achieved with surfactants and water, as well as organophilic clays.
Flocculation causes particles to join together to form a loose, open network. When a drilling fluid is flocculated (e.g., through the addition of salts), the filter cake that it generates at the well bore contains some of that flocculated character, and the rate of filtration increases. Conversely, thinners (deflocculants) like lignosulfonates disperse clay flocs, thereby decreasing cake permeability.
As important as it is to have a substantial colloidal fraction of solids with a broad PSD in the mud, it is equally important that it contain a substantial concentration of bridging particles with a broad PSD. Also critical is the maximum size of bridging particles. Particles about one-sixth to one-third the size of the maximum ‘‘pore throat’’ in a drilling interval suffice, but the fluid must maintain a significant concentration of those particles throughout the interval. The following can serve as a rough idea
of the required maximum bridging particle size [Glenn & Slusser]:

A drilling fluid containing particles of sizes ranging up to the requisite maximum should be able to effectively bridge the formation and form filter cake. Above 10 D or in fractures, larger particles are required, and most likely the amounts needed to minimize spurt loss will also increase with the size of the opening. Generally, with increasing concentration of bridging particles, bridging occurs faster and spurt loss declines. For consolidated rock with permeability in the range 100 to 1000 mD, only
1 lb/bbl of 10-mm particles is necessary to prevent mud spurt from invading farther than 1 inch into the rock. On unconsolidated sands of that same permeability, 5 to 30 times that amount may be required. Reservoir drilling fluids typically contain as much as 30 lb/bbl total of acid-soluble bridging materials (usually CaCO3), sized to provide a broad size distribution for all solids in the fluid.
For nonreservoir applications, enough particles of the required size range are usually present in most drilling fluids after cutting just a few feet of rock. However,extensive use of desanders and desilters when drilling unconsolidated sands may deplete these particles, and some bridging material may have to be added back. Likewise, when no drilling is involved (e.g., production repair jobs), bridging particles will need to be added to the fluid.
4.Rate of Penetration
With higher ROP, both rig time and cost of bits are greatly reduced, and the total drilling operation is less costly, as shown in Figure 2.11. 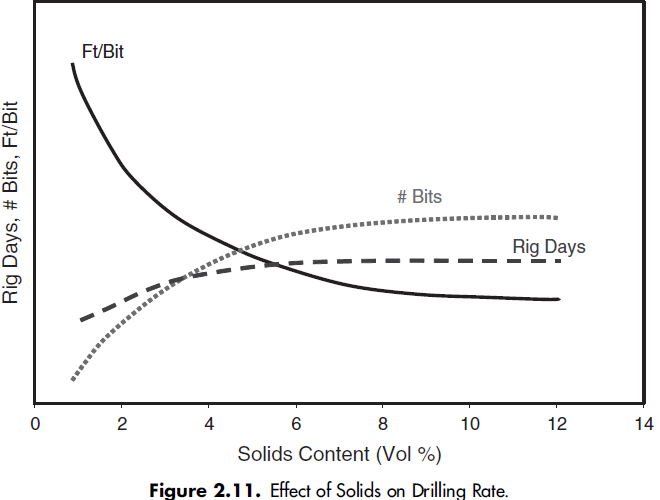 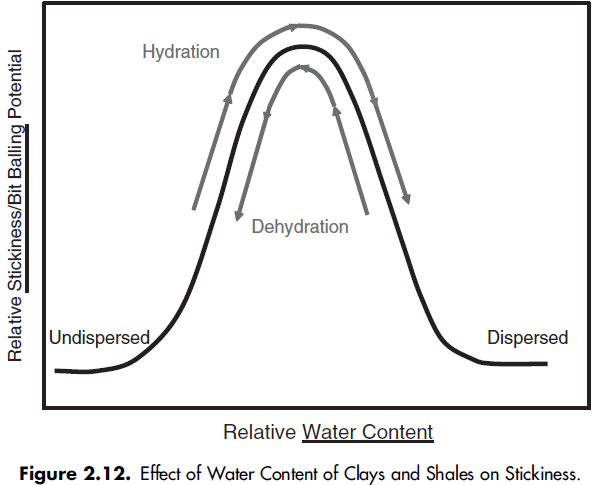 6.Lubricity
A drilling-fluid coefficient of friction that is low (0.1 or less) is generally advantageous, inasmuch as it helps the cuttings to travel as discrete particles over shaker screens. Most mud lubricants will also tend to adsorb onto almost any surface, including the exposed surfaces of the solids-control equipment. A thin film or coating of mud lubricant on those surfaces can help to protect them from corrosion and mitigate adhesion of sticky solids.
7.Corrosivity
To minimize corrosion of steel tubulars and solids-control devices, control of the responsible agents is a necessity. NAFs effectively prevent corrosion because they are nonconductive and oil-wet the steel surfaces. WBMs, on the other hand, can contain dissolved materials that set up electrochemical cells that ultimately lead to loss of iron from the steel surfaces in contact with the drilling fluid [Bush]. Dissolved O2 forms rust and pits on the steel surface, and is best controlled by minimizing air
entrainment: use only submerged guns in the mud pits; rig all return lines from desanders, etc., to discharge below mud level; and minimize use of the hopper. Keeping the mud at a pH between 9 and 10—with Ca(OH)2 (lime), NaOH (caustic), or MgO—helps greatly to keep the rate of corrosion at an acceptable level. A higher pH is not recommended, particularly in high-temperature wells, because under those conditions the hydroxyl ion becomes very reactive toward clays and polymers. If too
much corrosion still occurs, O2 scavengers such as sodium sulfate (Na2SO3) and triazine can be very effective. Less common but also very effective are corrosion inhibitors, such as amines and amine salts, which produce an oily barrier to O2. The other two primary agents of corrosion are carbon dioxide (CO2) and hydrogen sulfide (H2S). Both of these form acids in aqueous drilling fluids. H2S in particular is a cause for concern because of its high toxicity and its ability to cause hydrogen stress cracking that can lead to fatigue failure of tubulars and solids-control equipment. Again, a high pH can serve as the front line of defense. For high levels of H2S, though, zinc carbonate, zinc chelate, powdered iron, or magnetite may also be necessary. A mixture recommended by the API for polymer-based WBMs to minimize both corrosion and degradation of polymers by O2, CO2, and H2S consists of MgO, Na2SO3 or triazine, and triethanolamine (to sequester iron and remove H2S/CO2) [API RP 13C].
It should be noted that dissolved CO2, O2, and salts can all accelerate stress cracking and failure of steel hardware, though the effect is most pronounced with H2S.
Finally, microbes can form corrosive agents, particularly H2S, via degradation of mud components in the drilling fluid like lignosulfonate or biopolymers. The most effective ways to control microbial corrosion are through use of clean make-up water and a biocide, such as glutaraldehyde or bleach.
8.Drilling-Fluid Stability and Maintenance
Maintaining the drilling fluid in good condition is essential not only for controlling the mud properties but also to ensure proper operation of solids-control equipment. Vigilance against the effects of contamination and elevated temperatures is particularly important. Invasion of foreign materials, such as water and oils, and thermal degradation of polymers can affect viscosity and filtration properties radically and compromise the performance of some solids-control equipment. Elevated temperatures can also destroy direct and invert-emulsion systems and can cause gelation in clay-based muds, either of which can negatively affect equipment performance. Keeping the mud properties within the design parameters is critical, which requires maintaining the concentrations of mud products and drilled solids at appropriate levels.