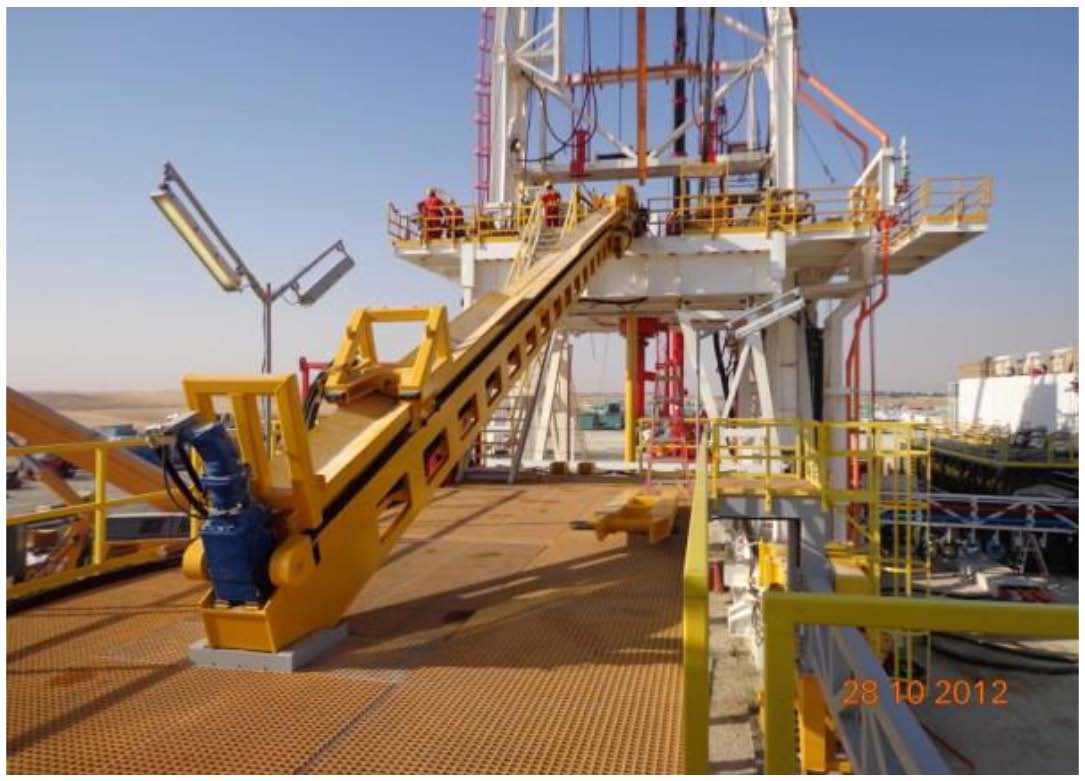 Other than the drill floor itself, the solids control system requires more attention than any other single rig system whether onshore or offshore. For that reason, it is most important that the solids control system is designed to be as efficient and as maintenance free as possible. This section will discuss that pan of the mud system extending from the bell nipple (or diverter housing outlet) to the mud pump suction piping.

END_OF_DOCUMENT_TOKEN_TO_BE_REPLACED

Gumbo is formed in the annulus from the adherence of sticky particles to each other. It is usually a wet, sticky mass of clay, but finely ground limestone can also act as gumbo. The most common occurrence of gumbo is during drilling of recent sediments in the ocean. Enough gumbo can arrive at the surface to lift a rotary bushing from a rotary table. This sticky mass is difficult to screen. In areas where gumbo is prevalent, it should be removed before it reaches the main shale shakers.

Many gumbo removal devices are fabricated at the rig site, frequently in emergency response to a ‘‘gumbo attack.’’ These devices have many different shapes but are usually in the form of a slide at the upper end of a flowline. One of the most common designs involves a slide formed from steeply sloped rods spaced 1 to 3 inches apart and about 6 to 8 feet long. The angle of repose of cuttings is around 42 °, so the slides have a slope of around 45 °. Gumbo, or clay, does not stick to stainless steel very well; consequently, some of the devices are made with stainless steel rods. Drilling fluid easily passes through the relatively wide spacing in the rods, and the sticky gumbo mass slides down to disposal (Figure 6.1). 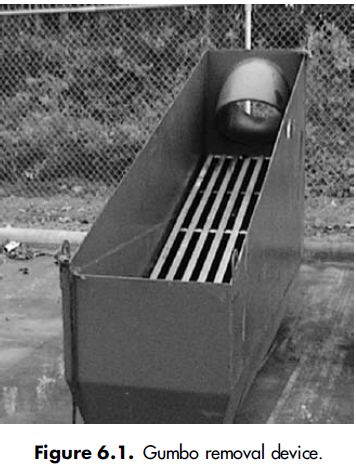 Several manufacturers have now built gumbo removal devices for rig installation. One of these units consists of a series of steel bars formed into an endless belt. The bars are spaced 1 to 2 inches apart and disposed perpendicular to the drilling-fluid flow. The bars move parallel to the flow. Gumbo is transported to the discharge end of the belt, and the drilling fluid easily flows through the spacing between the bars. Another machine uses a synthetic mesh belt with large openings, like an API 5 to an API 10 screen. The belt runs uphill and conveys gumbo from a pool of drilling fluid. A counterrotating brush is used to clean gumbo from the underside of the belt. The belt speed is variable so it can be adjusted for the solids-loading and fluid properties.

When linear motion shale shakers were introduced into oil well drilling operations, drilling fluid could routinely be sieved through API 200 screens for the first time. This goal was desirable because it allowed the removal of drilled-solids sizes down to the top of the size range for barite that met American Petroleum Institute (API) specifications.

The ‘‘rig’’ shakers remained attached to the flowline to remove very large cuttings and gumbo. These were called scalping shakers. Even in places where gumbo might not be present, scalpers were used to prevent very large cuttings or large chunks of shale from damaging the API 200+ screens. These screens have finer wires, which are much more fragile than wire used on an API 20 or API 40 screens. Scalping shakers also had the advantage of removing some of the larger solids that would enter the mud tanks when a hole appeared in the fine screen.

Tests indicated that fitting the scalper with the finest screen possible, an API 80 or API 100, did not result in the removal of more solids when combined with the API 200 on the main shaker. Apparently, shale in that size range would break apart on the scalper into pieces smaller than 74 microns, or it would damage the cuttings enough so that the linear motion shaker screen broke the cuttings. This action resulted in fewer total solids rejected from the system. Scalping shakers should be used as an insurance package to prevent very large cuttings from hitting the fine screens. Scalping shakers, even with an API 20 screen, will still convey gumbo. Frequently, relatively fine screens on a scalping shaker experience near-size blinding. Coarse screens are preferred.

Scalping shakers should be used with either linear motion or balanced elliptical motion shale shakers.Gumbomust be removed before any screen can convey drilled solids uphill out of a pool of liquid. These motions may be used on shakers to remove gumbo if the screen slopes downward from the back tank (possum belly) to the discharge end of the shaker.

Combination shakers are available that mount a downward-sloping screen on a linear motion shaker above an upward-sloping screen with a linear motion. Gumbo will move down the top screen and be removed before the fluid arrives at the lower screen. Again, however, the scalping screen should be a very coarse screen. Some screens reject gumbo significantly better than others. Some screens also convey gumbo more efficiently than others. Manufacturers have a great assortment of screens that have been tested in various regions of the world that experience gumbo attacks. Hook-strip screens with large rectangular openings—in the range of API 12—have been used very effectively in many regions. Experience indicates that the rectangular openings should be oriented so that the long opening is parallel to the flow.

Several important factors control whether to use a shale shaker/scalping shaker to effectively remove gumbo. If the screen deck can be tilted downward, with an articulated deck, gravity will assist gumbo removal. If the older-style unbalanced elliptical motion shaker is used, the fixed downward angle will usually satisfactorily convey gumbo. If the deck angle is flat, like most circular motion machines, the shaker has to generate a sufficient negative, or downward, force vector, normal to screen, to overcome the adhesion factor (or stickiness) of the gumbo so that the screen separates from the solids. If it does not separate, the gumbo is effectively glued to that spot on the screen.

If the drilling fluid is changed to decrease the quantity of gumbo reaching the surface, gumbo removal may not be a problem for main shakers with a high g factor. Scalping shakers, however, will still provide insurance for removal of large cuttings and in case the break in a shale shaker screen goes unnoticed.