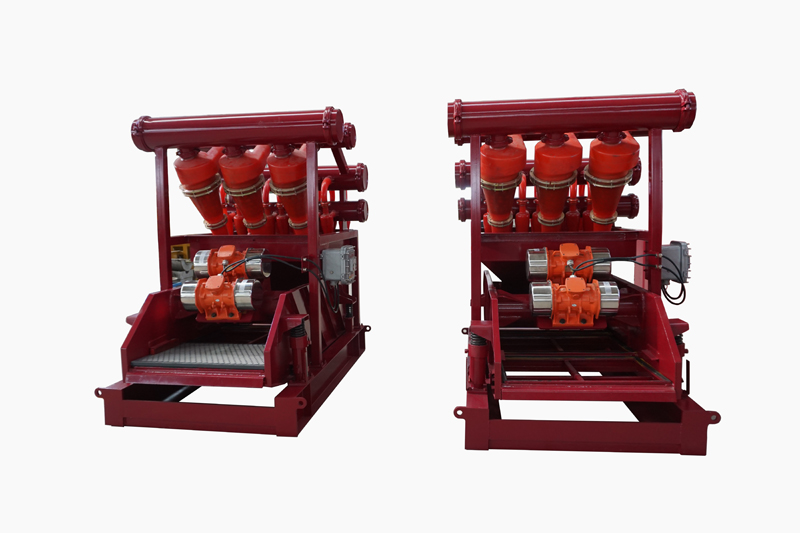 A mud cleaner is a combination of desanders and/or desilters to remove drilled solids from mud. -wiki

These articles about mud cleaner you may interest

The finest screen at that time could separate solids only larger than about 177 microns (API 80) from a normal drilling-rig circulating rate. Barite specifications restricted solids to sizes predominantly smaller than 74 microns (API sand). Hydrocyclones removed large quantities of barite from a weighted drilling fluid and were not generally used. This meant that all of the drilled solids between 74 and 177 microns were available for removal but could not be removed with equipment available at that time. The mud cleaner was invented to remove those drilled solids.

The Main Struture Of Cleaner

Mud cleaners are a combination of hydrocyclones mounted above shaker screens with small openings. Most 4-inch hydrocyclones discard around 1–3 gpm for every 50-gpm input. With a 1000-gpm flow rate input, the underflow from twenty 4-inch hydrocyclones would be only 20–60 gpm. Most shale shakers in the early 1970s could process this small flow rate through 74-micron (API 200) screens. Barite smaller than the openings, as well as drilled solids smaller than the openings, returned to the drilling fluid. Solids larger than the screen opening, and the solids clinging to those larger solids, were discarded. Solids larger than 74 microns made filter cakes incompressible and also increased the coefficient of friction between the drill string and the well bore. This was not unlike making a coarsesandpaper filter cake; so, stuck pipe was common.

Separation, or cut-point, curves can be misleading. Normally a uniform feed distribution is assumed. In the field, however, this may not actually exist. The cut point curve does not indicate the quantity of material in each size range. Removal of one pound out of two pounds, or 100 pounds out of 200 pounds is the 50% point.

Not much barite is in the large size range that will report to the underflow of the hydrocyclones. If this were not true and the cut point of a 4-inch hydrocyclone were about 20 microns, as reported for unweighted drilling fluid, the mud cleaner screens would fail from a weight overload during the first few minutes of operation. The 20-micron cut point normally reported for 4-inch hydrocyclones should also contain some statement about the size distribution injected into the cones. If there were no solids larger than 12 microns, the cut point would obviously be lower than the 12 microns.

Since the mud cleaner screen separates solids larger than the opening size, a low and sharp cut point is not needed from the hydrocyclones. The underflow of the hydrocyclones should be very wet. A better separation is made on the shaker screens if ample fluid is available to allow the screen to separate the solids from the slurry.

Some mud cleaners are designed to return some of the cone overflow to the screen to assist solids separation. This is preferable to spraying water or oil onto the screen to enhance the solids separation. Water or oil sprayed onto the screen dilutes the drilling fluid and requires the addition of more barite and chemicals. For example, if only 2 gpm were sprayed onto the mud cleaner screen, 2880 gal would be added to the system in one day. This 68.6 bbl of liquid phase will require the addition of all of the solids and chemicals required to create clean drilling fluid. This would be acceptable if about 18 bbl of drilled solids were discarded from the solids-control equipment in a slurry of about 35% volume of drilled solids in a drilling-fluid slurry. This quantity of drilled solids could be generated if only 180 feet of a 10-inch-diameter hole were drilled during the 24-hour period.

The example of using mud cleaner

Exercise: Validate the equations and calculations listed in the preceding paragraph.

When linear motion shale shakers were introduced, mud-cleaner utility appeared obsolete. Linear motion shale shakers could separate drilled solids larger than barite while handling all of a drilling rig’s circulation. However, many times desilters were plugged with solids too large to pass through a shale shaker screen in unweighted drilling fluids. These drilled solids reached the desilters and plugged the bottom apex. Their method of entry into the drilling-fluid system varied from (1) holes in shaker screens to (2) carryover from the discard end of the shale shakers to (3) improper mounting of shaker screens, including even gaps left between the upper end of the screens and the back tanks. Plugged desilter cones are a common sight around drilling rigs if no one is assigned the task of unplugging. Because this is such a common occurrence, it is not surprising that mud cleaners downstream of API 200 (74-micron) shaker screens are usually loaded with solids. Sometimes solids overload an API 150 screen on a mud cleaner even though API 200 screens are mounted on the main shale shakers.