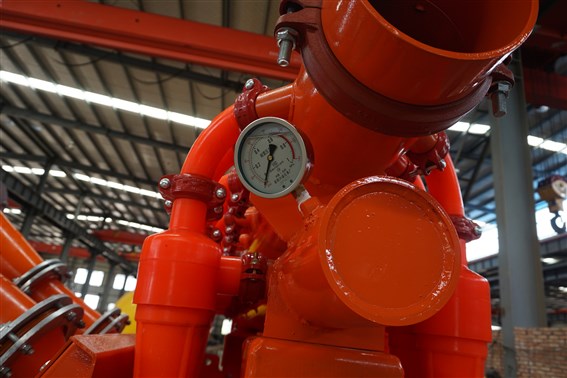 Hydrocyclones are essentially simple devices that convert pressure generated by a centrifugal pump into centrifugal force, causing suspended solids in the mud to be separated from the fluid. This separation is actually accelerated settling due to the increased gravitational force caused by the centrifugal action inside the cone.

Fluid from a centrifugal pump enters the hydrocyclone tangentially, at high velocity, through a feed nozzle on the side of the top cylinder. As drilling fluid enters the hydrocyclone, centrifugal force on the swirling slurry accelerates the solids to the cone wall. The drilling fluid, a mixture of liquid and solids, rotates rapidly while spiraling downward toward the apex.

Fluid and smaller-mass particles, which have been concentrated away from the cone wall, are forced to reverse flow direction into an upward-spiraling path at the center of the cone to exit through the vortex finder.

The vortex finder is a hollow tube that extends into the center of the cone. It diverts drilling fluid from flowing directly to the overflow outlet, causing the drilling fluid to move downward and into the cone.
The swirling liquid is forced inward and, still rotating in the same direction, reverses the downward flow and moves upward toward the center of the vortex finder. In a balanced cone, the inner cylinder of swirling fluid surrounds a cylinder of air that is pulled in through the cone apex.
Solids and a small amount of liquid are discharged from the lower apex of the cylinder. The apex opening relative to the diameter of the vortex finder will determine the dryness of the discharged solids.

Many balanced cones are designed to provide maximum separation efficiency when the inlet head is 75 feet. To be sure what the recommended inlet head is, check with the manufacturer’s technical group. Fluid will always have the same velocity within the cone if the same head is delivered to the hydrocyclone inlet. Pressure can be converted to feet of head with the equation frequently used in well-control calculations but rearranged slightly:
head （in feet）= PSI ⁄ （0.052）• (mud weight in ppg)
The relationship between manifold gauge pressure and drilling-fluid weight at constant 75-feet feed head is summarized in Table 1.

Hydrocyclones separate solids according to mass, which is a function of both density and particle size. However, in unweighted drilling fluids, the solids density has a comparatively narrow range, and size has the greatest influence on their settling.

Centrifugal forces act on the suspended-solids particles, so those with the largest mass (or largest size) are the first to move outward toward the wall of the hydrocyclone. Consequently, large solids with a small amount of liquid will concentrate at the cone wall, and smaller particles and the majority of liquid will concentrate in the inner portion.
Larger-size (higher-mass) particles, upon reaching the conical section, are exposed to the greatest centrifugal force and remain in their downward spiral path. The solids sliding down the wall of the cone, along with the bound liquid, exit through the apex orifice. This creates the underflow of the hydrocyclone.
Smaller particles are concentrated in the middle of the cone with most of the drilling fluid. As the cone narrows, the reduced cross-sectional area restricts the downward-spiraling path of the innermost layers. A second, upward vortex forms within the hydrocyclone and the center fluid layers with smaller solids particles turn toward the overflow. At the point of maximum shear, the shear stress within a 4-inch desilter is on the order and magnitude of 1,000 reciprocal seconds.
The upward-moving vortex creates a low-pressure zone in the center of the hydrocyclone. In a balanced cone, air will enter the lower apex in counterflow to the solids and liquid discharged from the hydrocyclone. In an unbalanced cone, a rope discharge will emerge from the cone, resulting in excessive quantities of liquid and a wide range of solids in the discard. An unbalanced cone is little more than a settling pot, similar in operation to a sand trap.
There are two countercurrent spiraling streams in a balanced hydrocyclone, one spiraling downward along the cone surface and the other spiraling upward along the cone center axis. The countercurrent directions, together with turbulent eddy currents, concomitant with extremely high velocities, resulting in an inefficient separation of particles.
The two streams tend to commingle within the contact regions, and particles are incorporated into the wrong streams. Hydrocyclones, therefore, do not make a sharp separation of solids sizes. The efficiency of a hydrocyclone can be improved by extending the vortex finder farther into the cone, which eliminates some of the comminglings. The farther the vortex finder is extended, the better the separation.

How to Choose Hydrocyclone Properly

Hydrocyclone sizes are designed arbitrarily by the inside cone diameter at the inlet. By convention, desanders have a cone diameter of 6 inches and larger; desilters have internal diameters smaller than 6 inches.
Normally, discharges from the apex of these cones are discarded when used on unweighted drilling fluids. Prolonged use of these cones on a weighted drilling fluid will result in a significant reduction in drilling fluid density caused by the discard of weighting material.
When these cones are used as part of a mud cleaner configuration, the cone underflow is presented to a shaker screen. The shaker screen returns most of the barite and liquid to the drilling-fluid system, rejecting solids larger than the screen mesh. This is a common application of unbalanced hydrocyclones, since the cut point is determined by the shaker screen and not the cone.
Since most hydrocyclones are designed to operate with 75 feet of head at the input manifold, the flow rate through the cones is constant and predictable from the diameter of the cone for a typical tangential feed cone inlet of given orifice size (Table 2). Obviously, manufacturers may select different orifice sizes at the inlet of the cone. The orifice size determines the flow rate through the cone and the internal geometry of the cone.

*These are general values. Some cones will vary. Other design variations of the feed chamber, although more difficult to manufacture, can minimize backpressure and therefore increase the cone feed rate or capacity while also increasing separation efficiency.
Hydrocyclones with feed chambers that reshape the incoming drilling fluid from a round-pipe profile to a rectangular one that conforms better to the feed chamber geometry can increase the amount of drilling fluid the cone can handle by 35–45% for the same pressure while at the same time increasing separation efficiency. The increased performance is due to the fact that the dead spaces in the feed chamber are eliminated.
If a ramp feed is included in the feed inlet, the drilling fluid is forced down, which allows incoming drilling fluid to enter without the extremeturbulence caused by impingement of the drilling-fluid streams. This reduces backpressure, which increases through put even more. It also minimizes turbulence inside the cone, which also increases the separation efficiency.

The D50 cut point of a solids-separation device is usually defined as the particle size at which one half of the weight of those particles goes to the underflow and one half of the weight goes to the overflow. The cut point is related to the inside diameter of the hydrocyclone.
For example, a 12-inch cone is capable of a D50 cut point of around 60 to 80 microns; a 6-inch cone is capable of around 40 to 60 microns; and a 4-inch cone is capable of around 20 to 40 microns. These cut points are representative for a fluid that contains a low solids content. The cut point will vary according to the size and quantity of solids in the feed and the flow properties of the fluid.
When hydrocyclones are mounted above the liquid level in the mud tanks, a siphon breaker should be installed in the overflow header or manifold from the cones. Otherwise, a high vacuum will occur and will actually vacuum up a lot of the solids that would otherwise be discarded; instead, these solids are reintroduced back into to the active system.
In some extreme cases, no solids will exit the cone apex if the vacuum is high enough. The siphon breaker installed as illustrated should be one-quarter of the diameter of the overflow header pipe (Figure 2).