Hydrocyclones are simple, easily maintained mechanical devices without moving parts. Separation is accomplished by transfer of kinetic input or feed energy into centrifugal force inside the cone. The centrifugal force acts on the drilling fluid slurry to rapidly separate drilled solids and other solid particles in accordance with Stokes’ law.

The solids that are generated by drilling in some formations are too fine for shale shaker to remove. Hydrocyclones must be relied on to remove the majority of these solids. Here the shale shaker protects the hydrocyclones from oversized particles that may cause plugging. 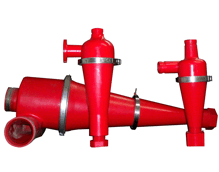 Hydrocyclones produce a wet discharge compared with shale shakers and centrifuges. Underflow density alone is not a good indicator of cone performance, as finer solids will have more associated liquid and the resultant slurry density will be lower than for coarser solids.

As the solids content increases, separation efficiency decreases and the size of particles that can be separated increases.

Hydrocyclones have the following disadvantages:

It is impractical to desand or desilt a mud containing appreciable amounts of barite. Silts and barite have about the same size range. The majority of barite particles are between 2 and 44 microns, some between 44 and 74 microns, and unfortunately some 8–15% are between 0 and 2 microns. A desander median cut (D50 cut point) falls between 25 and 30 microns. A desilter median cut falls between 10 and 15 microns. Since much of barite falls above these cuts, it would be discarded along with the silt and sand.

Generally, hydrocyclones are most efficient when solids have a diameter greater than 10 microns and are spherical in shape. If the solids are flat, like mica, movement tends to be random and dependent on whether the flat surface or edge is toward the gravitational force created in the vortex. Since separation efficiency depends somewhat on the freedom and velocity of the solid moving through the liquid phase, it is logical to use a fluid of as low viscosity as possible.

Hydrocyclones have the following advantages:

In sizing, the bases from which measurements are made are:

Because fine solids have more surface area per unit volume (specific area), the amount of liquid discharged per pound of solids is higher with fine solids than with coarse solids. Therefore, the difference between the feed and underflow densities is not a reliable indicator of hydrocyclone performance.

Cone diameter, cone angle, underflow diameter, feed head, and plastic viscosity have the largest effects on hydrocyclone performance. Barite particles 3 microns and smaller have a deleterious effect on drilling-fluid viscosity due to surface charge imbalance resulting from unsatisfied broken bonds on the ultra-fine’s surface. Therefore, if a centrifuge is set such that its median (D50) cut in 14 ppg of mud is a 3-micron barite particle, its median cut for drilled solids will be 5 (or 4.9) microns.

One Reply to “CONCLUSIONS HYDROCYCLONES”