Just as the nature of drilling-fluid solids affects the efficiency of solids control equipment, the nature of the solids also plays an integral role in the properties of drilling fluids, which in turn affect the properties of the solids and the performance of the equipment. This intricate and very complex dynamic relationship among the solids, drilling fluid, and solids-control equipment is represented in Figure 2.7. Any change made to one of these affects the other two, and those in turn affect all three,and so on. To optimize a drilling operation, it is important to understand how the solids affect bulk mud properties, particularly rheology, hole cleaning, filtration, drilling rate (rate of penetration [ROP]), along with surface properties such as shale inhibition potential, lubricity, and wetting characteristics. 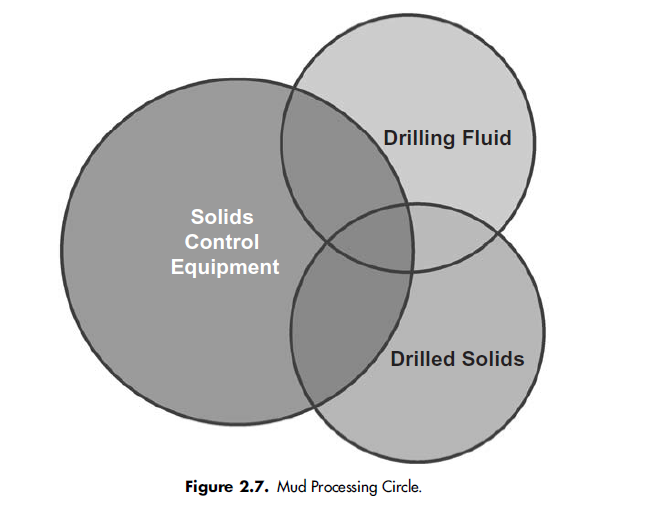 1.Rheology
Rheology is the study of the deformation and flow of matter. Viscosity is a measure of the resistance offered by that matter to a deforming force. Shear dominates most of the viscosity-related aspects of drilling operations. Because of that, shear viscosity (or simply, ‘‘viscosity’’) of drilling fluids is the property that is most commonly monitored and controlled. Retention of drilling fluid on cuttings is thought to be primarily a function of the viscosity of the mud and its wetting characteristics. Drilling fluids with elevated viscosity at high shear rates tend to exhibit greater retention of mud on cuttings and reduce the efficiency of high-shear devices like shale shakers [Lundie]. Conversely, elevated viscosity at low shear rates reduces the efficiency of low-shear devices like centrifuges, inasmuch as particle settling velocity and separation efficiency are inversely proportional to viscosity. Water or thinners will reduce both of these effects. Also, during procedures that generate large quantities of drilled solids (e.g., reaming), it is important to increase circulation rate and/or reduce drilling rate.
Other rheological properties can also affect how much drilling fluid is retained on cuttings and the interaction of cuttings with each other. Some drilling fluids can exhibit elasticity as well as viscosity. These viscoelastic fluids possess some solid-like qualities (elasticity), particularly at low shear rates, along with the usual liquid-like qualities (viscosity). Shear-thinning drilling fluids, such as xanthan gum–based fluids, tend to be viscoelastic and can lower efficiency of low-shear-rate devices like static separation tanks and centrifuges.
Viscoelasticity as discussed above is based on flow in shear. There is another kind of viscoelasticity, however, that is just now receiving some attention: extensional viscoelasticity. As the term implies, this property pertains to extensional or elongational flow and has been known to be important in industries in which processing involves squeezing a fluid through an orifice. This property may be important at high fluid flow rates, including flow through the drill bit and possibly in highthroughput
solids-control devices. High-molecular-weight (HMW) surface-active polymers, such as PHPA and 2-acrylamido-2-methylpropane sulfonic acid (AMPS)–acrylamide copolymers, which are used as shale encapsulators, produce high extensional viscosity. Muds with extensional viscosity—especially new muds will tend to ‘‘walk off ’’ the shakers. Addition of fine or ultra-fine solids, such as barite or bentonite, will minimize this effect.
Rheology Models
Shear viscosity is defined by the ratio of shear stress (ζ) to shear rate (γ): μ= ζ/γ
The traditional unit for viscosity is the Poise (P), or 0.1 Pa-sec (also1 dyne-sec/cm2), where Pa¼Pascal. Drilling fluids typically have viscosities that are fractions of a Poise, so that the derived unit, the centipoise (cP), is normally used, where 1 cP=0.01 P=1 mPa-sec. For Newtonian fluids, such as pure water or oil, viscosity is independent of shear rate. Thus, when the velocity of a Newtonian fluid in a pipe or annulus is increased, there is a corresponding increase in shear stress at the wall, and the effective viscosity is constant and simply called the viscosity [Barnes et al.]. Rearranging the viscosity equation gives
ζ=μ*γ
and plotting ζ versus γ will produce a straight line with a slope of μ that intersects the ordinate at zero. Drilling fluids are non-Newtonian, so that viscosity is not independent of shear rate. By convention, the expression used to designate the viscosity of non-Newtonian fluids is
μe= ζ/γ
where μe is called the ‘‘effective’’ viscosity, to emphasize that the shear rate at which the viscosity is measured needs to be stipulated. All commonly used drilling fluids are ‘‘shear-thinning,’’ that is, viscosity decreases with increasing shear rate. Various models are used to describe the shear-stress versus the shear-rate behavior of drilling fluids. The most popular are the Bingham Plastic, Power Law, and Herschel- Bulkley. The Bingham Plastic model is the simplest. It introduces a nonzero shear stress at zero shear rate:
ζ=μp*γ+ζ0
or
μe= ζ/γ=μp+ζ0/γ
where μp is dubbed the plastic viscosity and ζ0 the yield stress, that is, the stress required to initiate flow. μp, is analogous to μ in the Newtonian equation. Thus, with increasing shear rate, ζ0/γ approaches zero and μe approaches μp. If ζ is plotted versus γ, μp is the slope and ζ0 is the ordinate intercept. The Bingham Plastic model is the standard viscosity model used throughout the industry, and it can be made to fit highshear- rate viscosity data reasonably well. μp (or its oilfield variant PV) is generally associated with the viscosity of the base fluid and the number, size, and shape of solids in the slurry, while yield stress is associated with the tendency of components to build a shear-resistant.
When fitted to high-shear-rate viscosity measurements (the usual procedure), the Bingham Plastic model overestimates the low-shear-rate viscosity of most drilling fluids. The Power Law model (also called the Ostwald de Waele model) goes to the other extreme. The Power Law model can be expressed as follows:

where K is dubbed the consistency and n the flow behavior index. The Power Law model underestimates the low-shear-rate viscosity. Indeed, in this model, the value of ζ at zero shear rate is always zero. To alleviate this problem at low shear rates, the Herschel-Bulkley model was invented. It may be thought of as a hybrid between the Power Law and Bingham Plastic models and is essentially the Power Law model with a yield stress [Cheremisinoff]:

Portraits of the three rheology models are shown in Figure 2.8. For NAFs and clay-based WBMs, the Herschel-Bulkley model works much better than the Bingham Plastic model. For polymer-based WBMs, the Power Law model appears to provide the best fit of the three models; better yet is the Dual Power Law model: one for a low-shear-rate flow regimen (annular flow) and one for a high-shear-rate flow regimen (pipe flow). More discussion is presented in the example below.
Other models have been used too, including the Meter model (also called the Carreau or Krieger-Dougherty model), which describes structured particle suspensions well, and the Casson model, which fits OBM data well. However, neither of these models has been widely adopted by the drilling-fluid community. 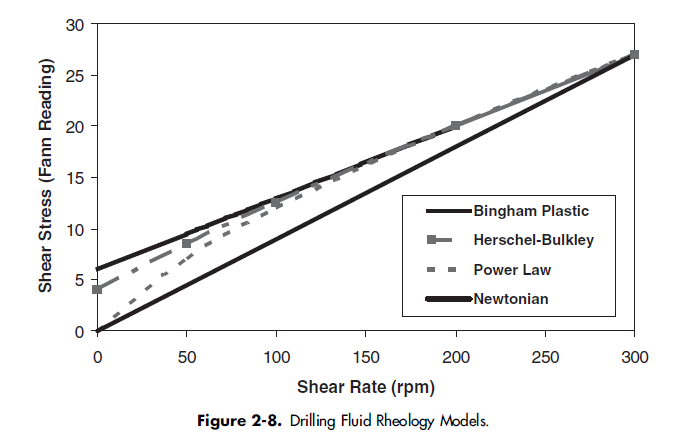 Shear rates in a drill pipe generally encompass the range from 511 to 1022 sec^-1 (Fann Speeds of 300 to 600 rpm), whereas in the annulus, flows are usually one to two orders of magnitude lower, such as 5.1 to 170 sec^-1 (Fann Speeds of 3 to 100 rpm). To change the Fann Speed to units of sec^-1, ψ (rpm) is multiplied by 1.7; to change the Fann Reading to units of dyne/cm^2, υ (degrees) is multiplied by 5.11. YP is actually in units of degrees but is usually reported as lb/100 ft2, since the units are
nearly equivalent: 1 degree=1.067 lb/100 ft2. Not only is the Bingham Plastic model easy to apply, it is also quite useful for diagnosing drilling fluid problems. Because electrochemical effects manifest themselves at lower shear rates, YP is a good indicator of contamination by solutes that affect the electrochemical environment. By contrast, PV is a function of the base fluid viscosity and concentration of solids. Thus, PV is a good indicator of contamination by drilled solids.
Application of the Power Law and Herschel-Bulkley Models to Rotary Viscometer Data
The Power Law model may be applied to Fann Readings of viscosity using the expression
Fann Reading = K * [Fann Speed]^n:
To obtain representative values of K and n, it is best to fit all of the Fann Readings to the model. A simple statistical technique, such as least squares regression, is quite satisfactory. If a programmable computer is not available but the flow regimen of interest is clearly understood, two Fann Readings will usually suffice to estimate the values of K and n. Naturally, this will lead to weighting of K and n to the Fann Speed range covered by those two Fann Readings. To estimate K and n in the simple
Power Law model from two Fann Readings, take the logarithm of both sides and substitute the data for the respective Fann Readings and Speeds:
Log (Fann Reading) = LogK + n Log (Fann Speed):
For example, assume pipe flow and a shear rate of interest covered by the 300 and 600 rpm Fann Readings. If the Fann Readings are 50, 30, 20, and 8 at 600, 300, 100, and 6 rpm, respectively,
Log [50] = LogK + n Log [600]
and
Log[30] =LogK + n Log [300].
Subtracting the second equation from the first eliminates K and producesone equation for n:
n= {Log [50/30]}=Log [600/300]= 0:737.
The value of K may be determined by substituting 0.737 for n in one of the equations above: 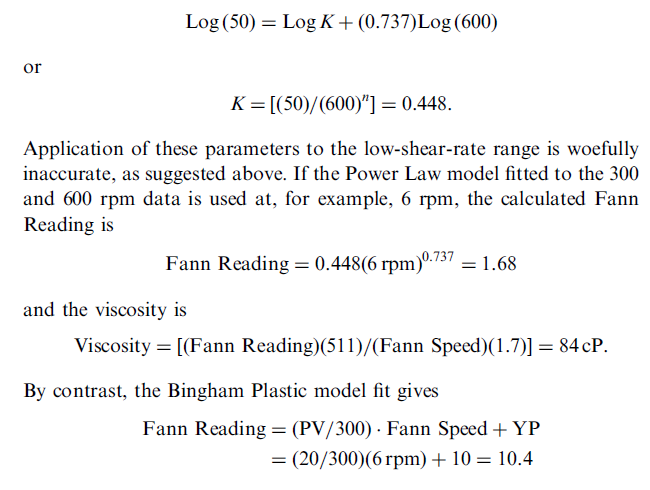 and the viscosity at 6 rpm is
Viscosity = {(Fann Reading)[511]=(Fann Speed)[1:7]} = 521 cP.
Thus, none of the rheology models should ever be used to extrapolate outside of the range used for the data fit.
The Herschel-Bulkley model is more difficult to apply, since the equation has three unknowns and there is no simple analog solution. Calculation of K, n, and ζ0 is generally carried out with an iterative procedure, which is difficult to do without a programmable computer. An alternative, which works fairly well, is to simply assign to ζ0 the 3-rpm Fann Reading, subtract that reading from all of the Fann Readings, and fit them to the Power Law model as described above.

Waste Water Management Workflow
The Use of Centrifuges with Drilling Fluids
USE OF THE CAPTURE EQUATION TO EVALUATE THE PERFORMANCE OF MECHANICAL SEPARATION EQUIPMENT USED TO P...
CONCLUSIONS HYDROCYCLONES
HOW SIZING AND INSTALL MUD AGITATOR

One Reply to “Properties of drilling fluids”