A major component in drilling operation success is drilling fluid performance. The cost of searching for hydrocarbon reserves becomes more expensive when drilling occurs offshore, in deep water, and in hostile environments. These drilling environments require fluids that excel in performance. Measuring fluid performance requires the evaluation of all key drilling parameters and their associated cost. Simply stated, the effectiveness of a fluid is judged by its influence on overall well cost. This chapter discusses the various fundamentals of drilling fluids and their performance in assuring a safe and expeditious drilling operation at minimum overall cost.

A fluid helps establish borehole stability by maintaining a chemical and/or mechanical balance.

The hydrostatic pressure exerted by the drilling fluid is normally designed to exceed the existing formation pressures. The desired result is the control of formation pressures and a mechanically stable borehole. In many cases, these factors must also be considered:

Any of these factors may contribute to borehole instability. In these situations, a protective casing string may be required, or hydrostatic pressure may need to be increased to values greater than the anticipated formation pressure.

Chemical interactions between the exposed formations of the borehole and the drilling fluid are a major factor in borehole stability. Borehole formation hydration can be the primary cause of hole instability, or a contributing factor.

Aqueous drilling fluids normally use a combination of:

The present use of low solids/non/dispersed fluids incorporates these principles. They rely on polymers and soluble salts to inhibit swelling and dispersion. Commonly used polymers include:

Isolating the fluid from the formation minimizes the potentially detrimental interaction between the filtrate and the formation. This is accomplished by controlling mud filtrate invasion of the formation. Filtrate invasion may be controlled by the type and quantity of colloidal material and by filtration control materials and special additives like cloud point glycols and products containing complexed aluminum.

Non-aqueous drilling fluids minimize wellbore instability problems by having all-oil filtrates and by the osmotic pressure generated by the dissolved salt.

The velocity at which fluid travels up the annulus is the most important hole cleaning factor. The annular velocity must be greater than the slip velocity of the cuttings for the cuttings to move up the well bore.

The size, shape, and weight of a cutting determine the viscosity necessary to control its settling rate through a moving fluid. Low shear rate viscosity strongly influences the carrying capacity of the fluid and reflects the conditions most like those in the well bore. The drilling fluid must have sufficient carrying capacity to remove cuttings from the hole.

The density of the suspending fluid has an associated buoyancy effect on the cuttings. An increase in density increases the capacity of the fluid to carry cuttings.

Hole cleaning is such a complex issue that the best analysis method is to use a simulator, such as the one contained in ADVANTAGE®.

Cool and Lubricate Bit and Drillstring

Considerable heat is generated by rotation of the bit and drillstring. The drilling fluid acts as a conductor to carry this heat away from the bit and to the surface. Current trends toward deeper and hotter holes make this a more important function.

The drilling fluid also provides lubrication for the cutting surfaces of the bit thereby extending their useful life and enhancing bit performance.

Filter cake deposited by the drilling fluid provides lubricity to the drill string, as do various specialty products. Oil and synthetic base fluids are lubricious by nature.

Circulation of the suspended material continues when drilling resumes. The drilling fluid should also exhibit properties which promote efficient removal of solids by surface equipment. 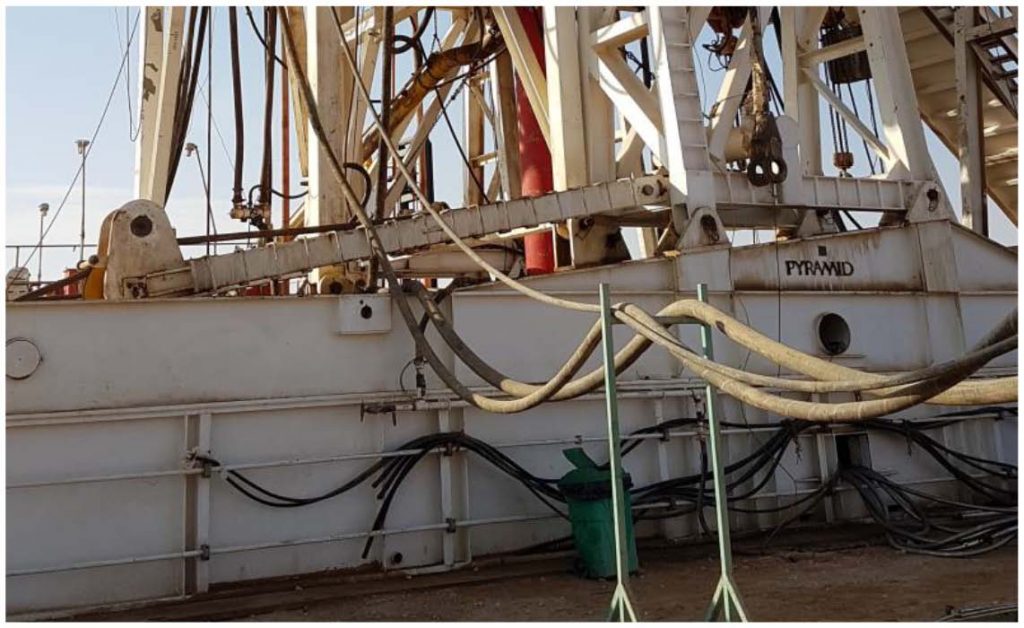 It is extremely important to evaluate how drilling fluids will react when potentially productive formations are penetrated. Whenever permeable formations are drilled, a filter cake is deposited on the wall of the borehole. The properties of this cake can be altered to minimize fluid invasion into
permeable zones. Also, the chemical characteristics of the filtrate of the drilling fluid can be controlled to reduce formation damage. Fluid–fluid interactions can be as important as fluidformation interactions. In many cases, specially prepared drill-in fluids are used to drill through particularly sensitive horizons.

Transmit Hydraulic HP to Clean Bit and Bottom of Borehole

Once the bit has created a drill cutting, this cutting must be removed from under the bit. If the cutting remains, it will be “re-drilled” into smaller particles which adversely affect penetration rate of the bit and fluid properties.

Release Undesirable Cuttings at the Surface

When drilled cuttings reach the surface, as many of the drilled solids as possible should be removed to prevent their recirculation. Mechanical equipment such as shale shakers, desanders, centrifuges, and desilters remove large amounts of cuttings from the drilling fluid. Flow properties of the fluid, however, influence the efficiency of the removal equipment. Settling pits also function well in removing undesirable cuttings, especially when fluid viscosity and gel strengths are low.

Obtaining maximum information on the formation being penetrated is imperative. A fluid which promotes cutting integrity is highly desirable for evaluation purposes. The use of electronic devices incorporated within the drill string has made logging and drilling simultaneous activities. Consequently, optimum drilling fluid properties should be maintained at all times during drilling, logging, and completion phases.

Drilling creates significant volumes of used fluid, drill cuttings and associated waste. Increased environmental awareness has resulted in legislation that restricts the use, handling and disposal of the by-products generated during drilling and after the well is finished. Careful attention to the composition of the fluid and the handling of the residual materials reduces the potential environmental impact of the drilling operation.