NON-OILFIELD USE OF MUD CLEANERS

One use of mud cleaners that has been very profitable has been in microtunneling. Tunneling under roadways, lakes, or streams for pipelines, fiber-optic conduits, or other installations requires drilling with a circulating fluid. Frequently, the liquid is difficult to acquire and disposal is a problem. So these small drilling systems install a mud cleaner on top of a one-tank circulating system. The solids from the mud cleaner screen are removed, and the excess liquid is returned to the tank. The screens used in this application usually have larger openings and larger wire diameters than the screens used for oil well applications. The purpose of these screens is to dewater the cuttings and retain as much fluid as possible. Drilled solids in this application are not as detrimental as
drilled solids in oil well drilling, so the openings in the screens do not need to be as small as with oil well drilling. 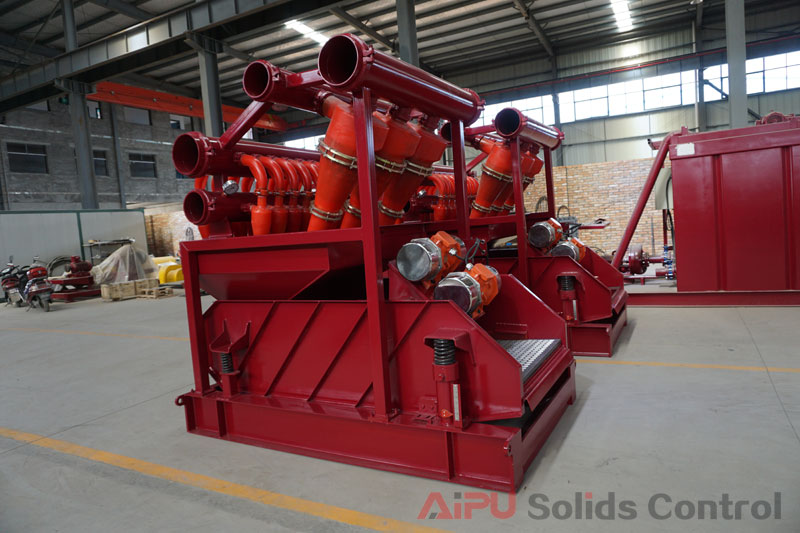 OILFIELD USE OF MUD CLEANERS

The principal use of mud cleaners has always been the removal of drilled solids larger than barite. Sufficient drilling fluid bypasses shale shakers so that even with 74-micron (API 200) screens on the shakers, many drilled solids are removed from a weighted drilling fluid. When linear motion shakers permitted API 200 screens to process all of the rig flow, mud cleaner usage declined rapidly. However, whenever a mud cleaner was used downstream, the screens were loaded with solids. Verification of larger solids bypassing the shale shaker has been evident from the prevalence of plugged desilters on a rig. Plugged desilters are very common. Usually, no one is assigned to unplug desilters, so they do not get unplugged.

These larger solids can come from holes in the main shaker screen or a variety of other places. One of the most prevalent is from the back tank (possum belly) of a shale shaker. Derrickmen are told to wash the screens off before a trip to prevent dried drilling fluid from plugging the shale shaker screens. The procedure usually involves opening the shale shaker bypass valve and dumping the accumulated solids into the tank immediately below the shaker. This compartment is usually called a sand trap, or settling tank. Unfortunately, all of these larger solids do not settle in this tank. Within minutes of starting circulation with a new bit on bottom, hydrocyclones plug. Another prevalent method of getting large solids downstream of a shale shaker is dumping the trip tank into the compartment below the shale shaker. Again, solids do not settle but do plug desilters. When solids plug the discharge port of a desilter, that desilter no longer removes solids. The solids-removal efficiency of the system decreases accordingly. If over half of the hydrocyclones are plugged, a properly designed removal system will suffer significantly; costs and trouble will increase accordingly.

A secondary use of mud cleaners is the removal of drilled solids from unweighted drilling fluids with a very expensive liquid phase—such as the initial application with the potassium chloride drilling fluid. In this case, the underflow from desilters is screened to remove solids larger than the screen opening. Solids and liquids pass through the screen and remain in the system. This is beneficial for nonaqueous drilling fluids as well as saline water–base drilling fluids.

In unweighted drilling fluids, the desilter underflow could be directed to a holding tank. A centrifuge could separate the larger solids for discard and return the smaller solids and most of the liquid phase to the drilling-fluid system. This method is easy to apply if a centrifuge is already available on a drilling rig. More drilled solids would be rejected by the centrifuge than by the mud cleaner screen; however, renting a centrifuge for this purpose may be more expensive. Both techniques have been used extensively in the field.

The cost of the liquid phase provides an incentive to recover as much of the fluid as possible: but this liquid phase from either a centrifuge or a mud cleaner screen throughput also recovers all of the small solids. In some wells these solids do not have a significant impact on drilling or trouble costs. In general, drilled solids have a much more obvious impact on drilling costs in weighted drilling fluids than in unweighted drilling fluids. In an unweighted drilling fluid, mud weights can be maintained around 8.8 to 8.9 ppg with proper solids control. Poor solids control, in equipment or arrangement, may make it almost impossible to keep the mud weight below 9.5 to 10 ppg. A 1-ppg difference will make a 520-psi difference in bottom-hole pressure at a depth of 10,000 feet. This reduces the drilling rate from chip hold-down and from rock strengthening.Not  only does it prevent achieving a good drilling rate, but it also affects hole cleaning. With unweighted drilling fluids, the plastic viscosity can be reduced from 12 cP to 6 cP when the mud weight is decreased by removing solids. For a yield point of 10 lb/100 sq ft, this would increase the K value from 224 to 466 effective cP. This means that bore cleaning would be significantly improved. (See the discussion in Chapter 2 on hole cleaning.) Good solids control requires generating large cuttings and bringing them to the surface without deterioration.

In some areas, mud cleaner discards do contain almost all barite. This is an indication that the formations being drilled are dispersing into the drilling fluid. Formations containing large quantities of smectite drilled with a freshwater drilling fluid will tend to disperse into very small particles. This is an indication that the drilling fluid should be more inhibitive. Generally, the mud cleaner should be shut down and a centrifuge used to remove the very small particles.

Avoid the common mistake of evaluating systems with immediate temporary cost evaluations in mind instead of total impact on drilling costs. For example, an analysis of replacing barite with drilled solids appears to be an easy calculation. If drilled solids are allowed to accuulate and increase mud weight, the barite additive cost is avoided until the mud weight approaches 11 ppg. The amount of barite ‘‘saved’’ is easily calculated. Even at 5 cents per pound, this barite savings cost is significant; however, this will result in a much more expensive well. Review the problems associated with not removing drilled solids discussed earlier and expect to see most of those problems arise from weighting a drilling fluid with too many drilled solids.