Shale shaker screens made of two or three layers of screen cloth of different mesh sizes present openings that cannot be easily characterized. A technique to describe these openings has been adopted by the API as the ‘‘Recommended Practice for Designations of Shale Shaker Screens,’’ API RP 13C, to be issued soon. This recommended practice supersedes the second edition (1985) of API RP 13E, which was valid for only single-layer screens.
The new designation system was chosen to convey information on screen opening size distribution and the ability of nonvibrating screens to pass fluid. Information for each of the following is legibly stamped on a tag attached to the screen panel in such a way as to be visible after the screen is installed on the shale shaker:
. Manufacturer’s designation
. API number
. Flow capacity
. Screen conductance
. Conductance
. Total nonblanked area

Manufacturer’s Designation
The screen manufacturer may name a particular screen in any manner it desires. This designation is used when ordering a shaker screen with particular characteristics.

API Number
Shaker screen designation has been complicated by the advent of multilayered screens. When two or three screens are layered together, the opening sizes are not uniform. Experience has shown that the flow rate through these layered screens is much higher than anticipated, and the solids-removal rate is maintained. Since the screens have different irregular shapes, the standard mesh equivalent cannot be used to describe the screens. API RP 13C was recently rewritten by a task group composed of most of the authors of this book. The task group selected a mechanical method of designating shale shaker screens and comparing them to equivalent square mesh opening sizes. This section describes this method for determining the API U.S. sieve number equivalent of a shaker screen using a laboratory sieve shaker,
U.S. Standard Test Sieves, and sized grit samples. Screens are rated on the U.S. sieve number scale by the separations they achieve in dry sieving standard grit samples and comparing these separations to the separations of the same standard grit samples with standard U.S. sieves.
For example, a shaker screen that separates the grit sample similar to a U.S. 100 mesh test sieve is designated an API 100. Standard U.S. Test Sieves applicable to this procedure are as follows: 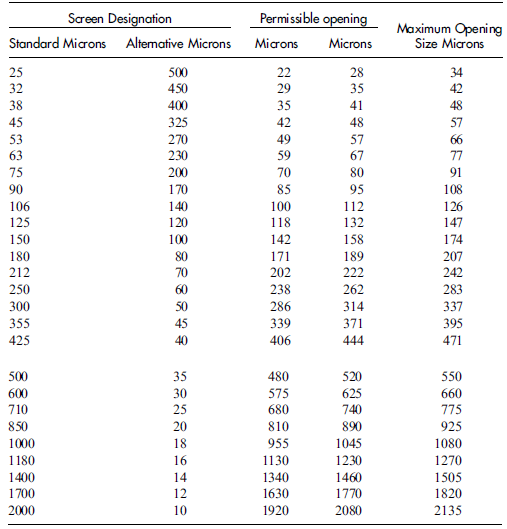 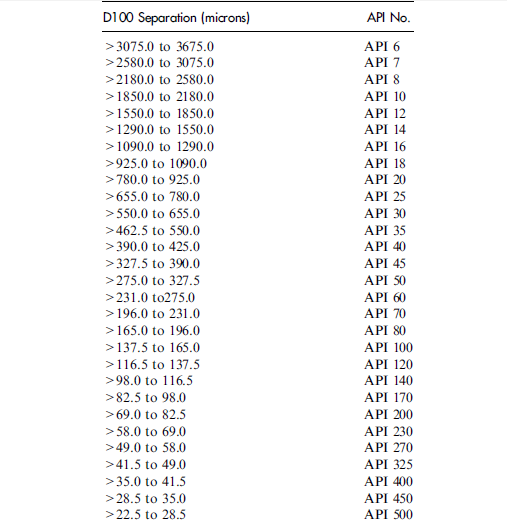 In the graph that follows, 33 weight percentage of the grit sample was captured on the test screen. This screen would have an API number of 140 and an opening size of 102 microns.
API Designation 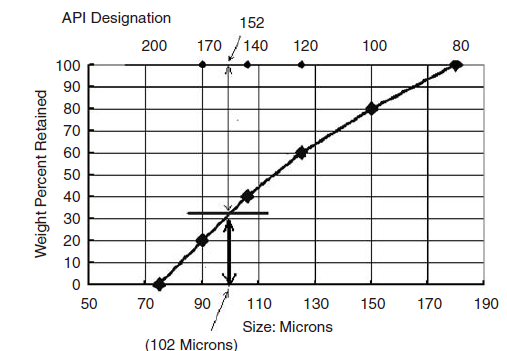 The designation would be an API number of 140, with the actual separation point of 102 microns in parentheses:
API 140 (102 microns)
The ‘‘mesh’’ designation is now called an API number so that the new designation will be more rig-user friendly. Rig crews recognize ‘‘mesh size’’ even though they may not actually know the definition. The change is necessary, since the API Recommended Practices are being converted to International Standards Organization (ISO) documents. ISO uses the metric system, consequently the number of openings per inch would need to be converted to the number of openings per centimeter or meter. This number would be meaningless to most rig crews.
The API designation number is specified to appear at least three times larger in physical appearance than any other letters or numbers on the screen tag. The ASTM 140 screen has openings of 106 microns, and an ASTM 170 screen has openings of 90 microns. The number in parentheses will indicate that the screen designation was actually measured and provide an indication of how close the openings are to standard screens. 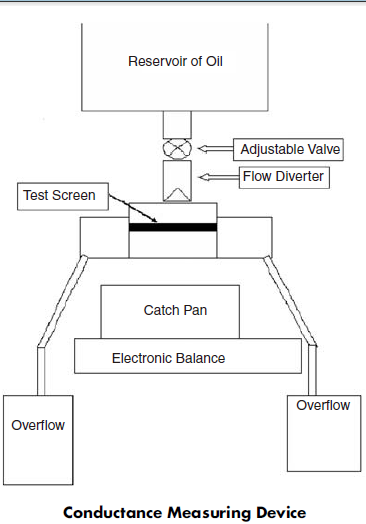 A screen that makes an extra-fine separation is not useful in the drilling industry if it will not pass a high-volume flow rate. The amount of fluid that a screen will process is dependent on the screen construction as well as solids conveyance, solids loading, pool depth, deck motion and acceleration, drilling-fluid properties, and screen blinding. Although it is difficult to calculate the expected fluid processing capacity of a shaker, screens can be ranked according to their ability to transmit fluid.

Conductance is a measure of the ease with which fluid flows through a screen cloth. It is analogous to permeability per unit thickness of the screen, C¼k(darcy)/l(mm). To calculate the flow through a porous medium, Darcy’s law is used as follows:

Now conductance, C, can be calculated where Q=V*A as follows:

Higher conductances mean that for a given pressure drop across the screen, more fluid is able to pass through the screen.
To measure the conductance, a 50-gal container of motor oil is mounted above the test screen. A flow valve is adjusted so that some of the oil overflows the screen into catch pans outside the apparatus.
The oil that flows through the screen is captured in a container on a balance. The weight of the container and oil is observed and recorded. When the flow becomes steady and uniform, the weight of the oil flowing through the screen is measured as a function of time. The temperature of the oil is measured and is kept constant. The density and viscosity of the oil as a function of temperature is determined prior to the test.