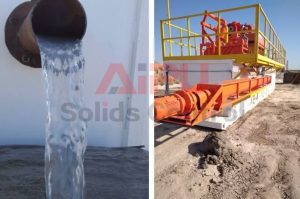 ed from formation cuttings were contaminants that mostly caused unstable mud performance. Combination of batch drilling sequence and unsuitable solids removal treatment, led to fine particle accumulation. This is one of the root causes of excessive torque and high ECD throughout the drilling operation.

From drilling fluid properties point of view, it is beneficial to minimize drilled solids content. This can be achieved by mechanical treatment, chemical treatment, dilution, and/or mixing new mud. All the above methods, will lead to additional cost impact. Thus, utilization of proper solids removal was required to balance between mechanical treatment and dilution method to reduce solids at acceptable cost.

The higher the torque, the higher possibilitiy of drill string failure. Thus, setting the appropriate torque limitation was important. With tapered string being used, the weakest point was the smaller pipe in hole. As a safety factor, the torque operating limitation was set to 80% of smaller pipe make up torque. Further analysis were conducted during drilling operation before decide on increasing torque setting limit when the actual drilling operation was not in line as predicted.

Experience of loss circulation on the offset well, was considered as an additional drilling limitation, thus the maximum ECD was limited at 16.1 ppg.

The first development well drilled into the reservoir zone is the vertical Y1 well. It was the control well for the other 3 horizontal wells. Because the well only penetrated ± 200 ft into the gas zone, the most influental friction factor was cased hole friction factor. However, having good hole cleaning and solid removal treatment was still required to have successful drilling operation.

Drilling program had been design to have good hole cleaning as below:

Solid removal treatment for reducing fine solid particle was planned as below:

Through the importance of steering the BHA within the reservoir boundary, it was decided to place drilling optimization tool on top of MWD tools. With this configuration, down hole torque reading reflected the actual torque on top of BHA connection. A conventional approach was used to decide TDS setting limit by using BHA connection as the weakest point on the drill sting. With down hole torque reading reaching more than 80% of make up torque on BHA connection on the lateral section, it was decided to limit the TDS torque to 18 kft.lb.

During drilling operation, high torque was reduced by implementing torque reduction technique on both solid control equipment and hole cleaning. It was modified into:

With lateral length on Y3 well not achiving target, some improvements were required on either drilling operation or re-planning drilling program. As lesson learned from previous well, there was no experience of hole losses with ECD more than 16.1 ppg, it was decided to increase ECD limitation to 16.2 ppg, while torque limit remained the same.

Unlike the previous well, Y4 well experience high torque up to its limit starting from the first stand drilled. Initially tried to reduce drilling torque by reducing drilling parameters but did not succeed. Compared with previous BHA, LWD Neutron Density tool was directly used while drilling on Y4 well, to reduce trip time for logging operation. Analysis shows that additional stabilizer in between LWD tools contributed to the additional torque value. With more contact to wellbore will increase the frictional force.

Calibration on Y4 well could not be done properly. This was because the actual drilling torque was reaching top drive setting limit at 18 kft.lb. To overcome high torque, combination of torque reduction technique must be applied. Reducing contact point, in this case removing stabilizer was not an option, thus combination of reducing friction factor and solid removal treatment were key points to continue the drilling operation.

Reducing friction factor was done by adding lubricant. Before using lubricant, compatibility check with the current mud system for each of the additives was performed. Drilling fluid rheology as well as lubricity coefficient before and after hot rolling was tested. Not only using newly mixed mud (lab mud), but also using existing mud sample taken from rigsite to reflect actual field condition.