Drilling-fluid costs can constitute a significant fraction of the overall costs of drilling a well. Often the cost is quoted per unit length drilled, which takes into account any problems encountered (and avoided), such as stuck pipe. In many cases, the cost ascribed to the fluid also includes costs associated with solids control/management and waste disposal. 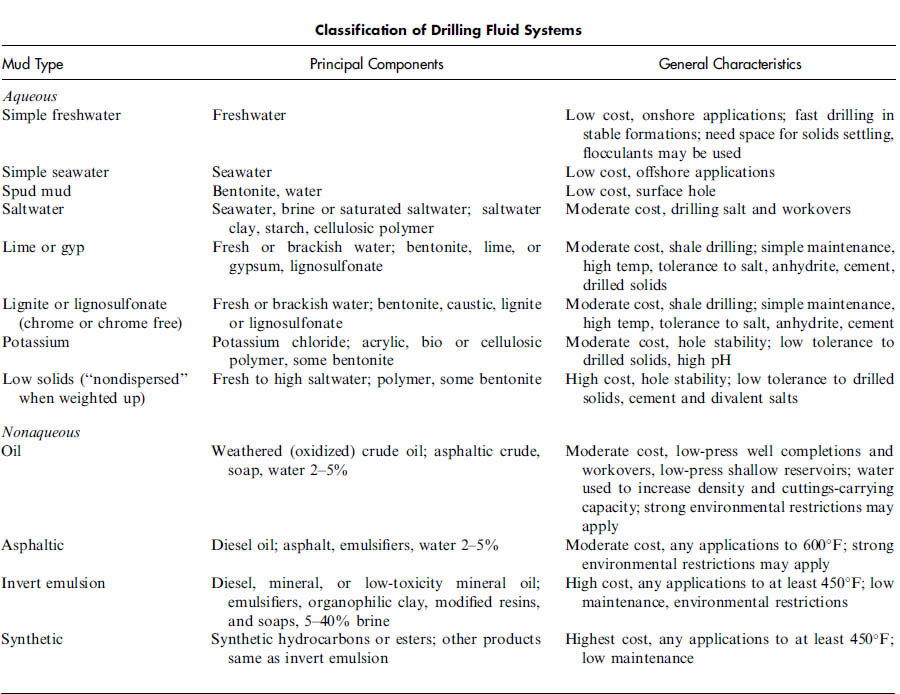 Thus, it is just as important to minimize costs associated with these two aspects as it is to ensure that the drilling fluid fulfills its primary functions [Young & Robinson]. Muds that require special attention and equipment to control the levels and types of solids frequently incur higher costs. Likewise, muds that generate waste fluid and cuttings, which must be hauled off (and perhaps treated) rather than discharged directly into the environment, generally incur higher costs.
Until recently, waste WBMs did not require any treatment and could be discharged directly into the environment. However, a number of components in WBMs are becoming increasingly restricted or prohibited. Chrome-containing materials, such as chrome lignosulfonates, are prohibited in many areas by governmental regulations. Tight restrictions are imposed in many areas on chloride, nitrate, and potassium salts, or, more generally, on the total electrical conductivity of the mud. In the North Sea, use of polyacrylamide polymers, such as partially hydrolyzed polyacrylamide (PHPA), is also severely restricted. OBMs tend to be restricted even more than WBMs, especially offshore, and in many places they can be used only if a zero discharge strategy (sometimes called a closed loop system) is adopted [Lal & Thurber].
On the other hand, SBMs often can be discharged directly into the sea if they meet certain toxicity/biodegradability criteria and, in the United States, do not create a sheen; as a result, though SBMs generally incur higher initial costs than OBMs, disposal costs for SBMs tend to be considerably less, which can make them more economical to run.