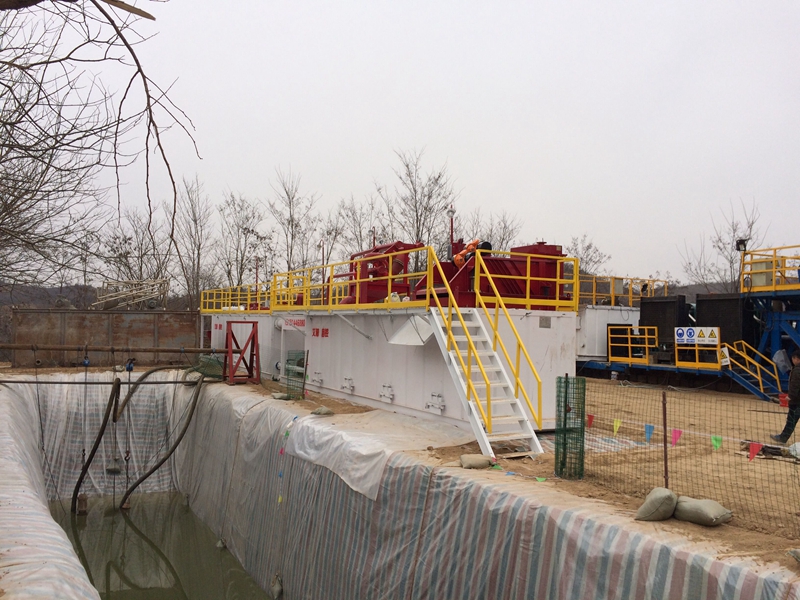 A one-step, unique solids control system can simultaneously discard small and large particles from the mud. The one-step solids control fluid conditioning can deliver desirable rheological properties and a reasonable size range for the suspended material.

The importance of solids control in any drilling operation became evident when well costs and drilling problems could be correlated to drilling fluid properties, size, and concentration of suspended solids. Problems are manifested through reduced hole size in highly permeable or highly plastic and overstressed zones, decreasing equipment and bit life, slow penetration rate, and partial increase in system pressure losses because of viscous effects. Through downhole solids control and the application of vortex drilling, the problems of reduced bit life and slow penetration have been addressed successfully.

Case 1. Size analysis of the material discarded at a rate of few gallons per minute through the small-particle port (concentric) has minimized the need for use of other fluid-processing systems to control the viscosity.

In addition, the median size of the concentric discharge is about 2.2 μm, as compared with 3.0 μm for the centrifuge discharge. The reason for the appearance of a sharper cut by the centrifuge is the addition of dilution water to the centrifuge.

But, because no dilution water is required by the one-step solids control, the cut does not appear as sharp. When the size of the particles is small, the particles not only contribute to high viscosity, but also become extremely sensitive to contaminants; in other words, they flocculate quickly. Although the amount of low-gravity solid clay is small, it is still not immune to flocculation by these contaminants.

Furthermore, the clay constituents of low-gravity solids, usually a major source of undesirable low-gravity, viscosity-building solids, are shown in Table 1. Again, the concentric device has rejected higher amounts of undesirable clays than the centrifuge. These analyses were done before final conditioning of the mud system.

When the mud is fully conditioned, the mud system reaches a certain size equilibrium where the feed and suction-pit size distributions tend to converge to a narrow size range at high pressures. This is discussed in Case 3.

Case 3. In the previous two field cases, we noted that the high percentage of small particles in the range of 4 μm and less could cause viscosity, yield-point, and gel-strength problems, especially if a small amount of contaminants, such as salt and calcium, get into the mud system and if the mud is left unconditioned. In Case 3 we have a different situation.

The mud has been conditioned from the start of the well. The suction-pit mud  and the feed mud  have converged to a range of sizes that are very close for the given operating pressure; i.e., they have a median diameter, d50 , of about 10 to 12 μm and the slopes of the curves are practically the same. Although the barite used in this mud contains nearly 8% impurities, it still meets the tentative API size specifications because only 6 to 7% falls at or below 6 μm.

The barite curve shows that only 50% is 20 μm or less, with the shale shaker allowing passage of 48 % of the barite to be combined with the suction-pit mud. As is seen, only about 2 % of very large barite particles is discarded by the shale shaker while retaining a high percentage of 17μm barite in the mud.

In such a case, the concentric device would discard more of the small particles and the lower end of Curve 5 would shift to the right.

The gain in viscosity was attributed to the buildup of fines. However, after the solids-control equipment was operated, the viscosity was stabilized and CI- content began to decrease. Examination of discarded solids showed a high concentration of salt in the one step solids control discarded material.

To examine the quality of the product recovered by the centrifuge, a thorough mineralogical analysis of feed and recovered material was made with X-ray diffraction, SEM, and petrographic light microscope.

At this point several questions may be raised as to why the viscosity should be controlled by discarding the main gel through a centrifuge. Why not add gel in a controlled manner rather than discard it, thinking we have controlled the fines buildup? If mudmaking fines are coming from the well, why not balance it through the addition of controlled amounts of gel? 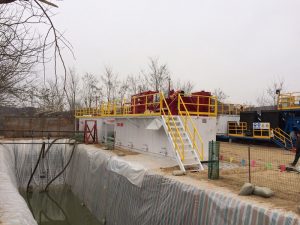