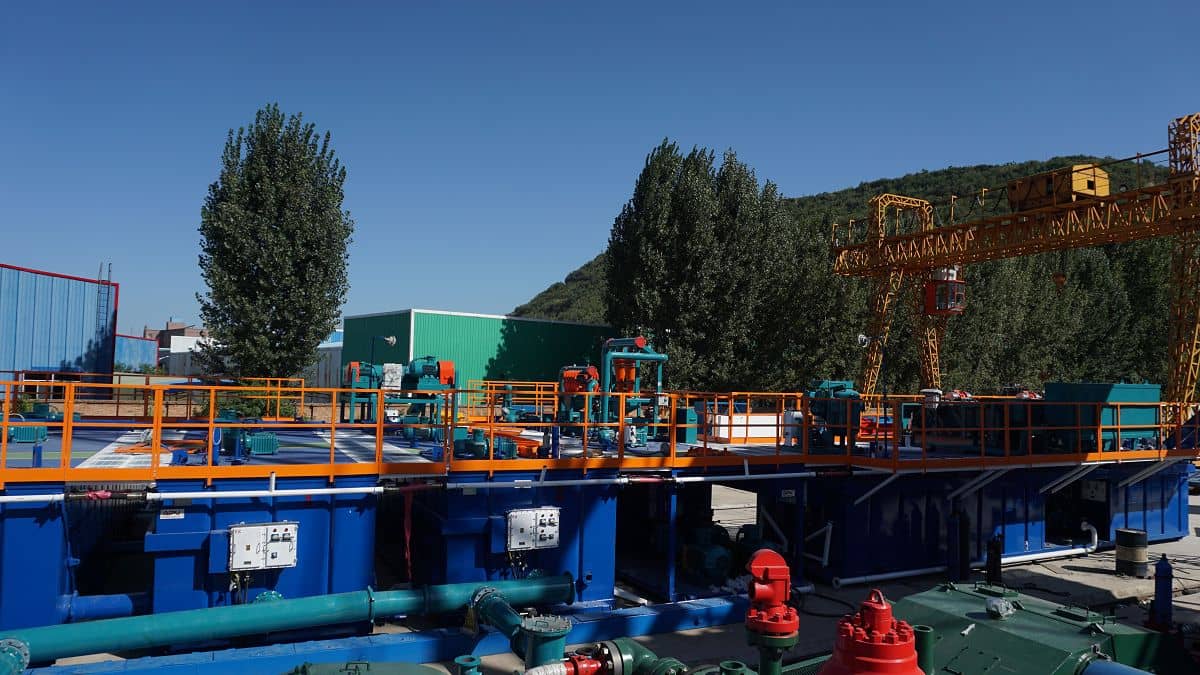 The mud tanks cleaning system is built together of different components according to your needs. It is not desirable to extract too many particles from the drilling mud because it means that the mud must be added to more weight material before returning to the well. There is a difference in how the cleaning system looks and what accessories are used from rig to rig.

There are very strict limits for the discharge of drilling mud due to HSE. It is important to have a focus and be concentrated when dealing with mud circulation and treatment. However, there is a difference if you drill with water-based or oil-based drilling mud. If water-based mud is used, it is permitted to release the drill cuttings back into the sea as long as there is no hydrocarbon contamination on the cuttings. This is not permitted for drill cuttings contaminated by oil-based mud. In cases where oil-based mud is drilled, all cuttings must be collected and sent to shore for further processing.

Another solution used is cuttings injection. Cuttings injection is done to get rid of oil-contaminated cuttings, while at the same time rebuilding the strength of a reservoir when drained of oil or gas. This avoids collapse in the formation and it is profitable and functional.

The cuttings are cleaned and processed in several steps before being injected back into an injection well. However, some additional equipment is required onboard to perform this operation. However, it has been found that the wells used for cuttings injection do not always hold tightly, as much as 10 percent of the wells have been found to leak to the external environment.

When drilling a well, large quantities of drilling mud are needed. There should be enough mud for the entire well, all the surface equipment and something in mind. It is also desirable to replace parts or all of the drilling mud along the drilling stages as formation properties change.

In addition, comes the volume that the riser contains when the well is connected to the surface with BOP and riser. This requires that there is sufficient storage space for drilling mud on board the installation.

It consists of the liquid (water or oil-based mud), weight material (barite) and bentonite which increases the viscosity of the liquid. The base mud is used to mix the pre-mixed mud.

Base drilling fluid is transported by boat to the field and pumped over to the installation. On board the platform, large tanks are stored in the shafts or in a suitable area (mud module) if the platform has no shaft. The size of the storage mud tanks varies and they can be so large that they have a total capacity of over 2500 m³ base drilling mud.

On floating rigs, there is usually 600 to 1800 m³ of storage capacity for drilling fluid. Floating rigs often have two different storage systems, main storage for mud on the deck near the pump room, and spare storage in the legs (shafts) or pontoons. In addition, the dry matter barite and bentonite are stored in their own bulk stations on board.

If drilling mud remains in the tanks for too long without movement, the barite in the drilling mud will fall to the bottom of the tank. Therefore, all tanks onboard are equipped with one or more agitators, depending on the size of the tank.

Two different methods for mixing mud on board

When one needs to make ready-mixed mud, base mud is pumped through pipelines from the tanks into the shaft and into smaller tanks called active mud tanks . These smaller thoughts are often referred to as pit .

In the mud, weight material, viscosity-increasing material, or other additives that are needed as needed in the well are added. This is done by means of a transfer pump which pumps the mud from the tank you want to mix into, through pipelines, and back to the same tank. This tank is then regarded as an active mixing tank. On this trip, the drilling mud has been inside the mixing room and the desired chemicals have been added to achieve the properties necessary for the drilling mud.

Weight material, viscosity increasing material and additives can be taken on board in powder form. It is stored in the bulk system, sacks and big-bags. When mixed, it is pumped to the mixing station where everything is collected in a piping system that goes to the pit.

The tanks attached to the pump room are smaller than the storage tanks. The size of the tanks can vary from 15 m 3 to 80 m³. The big differences come from the volume required by various dilling mud mixtures. The tanks have names like Active, Reserve, Chemical, and Slug. Sewage tank is used to mix a small amount of mud with special properties (often called a pill). Chemicals that give the mud special properties are added to the chemical tank. The chemical tank is a closed system with suction for the safe handling of the chemicals. The reserve tank often contains heavy mud (kill mud) which is clear in case you get a kick in the well.

How Solids Control Equipment Works from Eric Tian on Vimeo.

One Reply to “Mud Tanks System”