Mud Gas Separator is commonly called a gas-buster or poor boy degasser. It captures and separates large volume of free gas within the drilling fluid. If there is a “KICK” situation, this vessel separates the mud and the gas by allowing it to flow over baffle plates. The gas then is forced to flow through a line and vent it to a flare. A “KICK” situation happens when the annular hydrostatic pressure in a drilling well temporarily (and usually relatively suddenly) falls below that of the formation, or pore, pressure in a permeable section downhole, and before control of the situation is lost.-wiki

The purpose of a separator is to separate free gas or mixed gas and oil
from the drilling fluid and convey the gas or oil to a flare or holding tank. 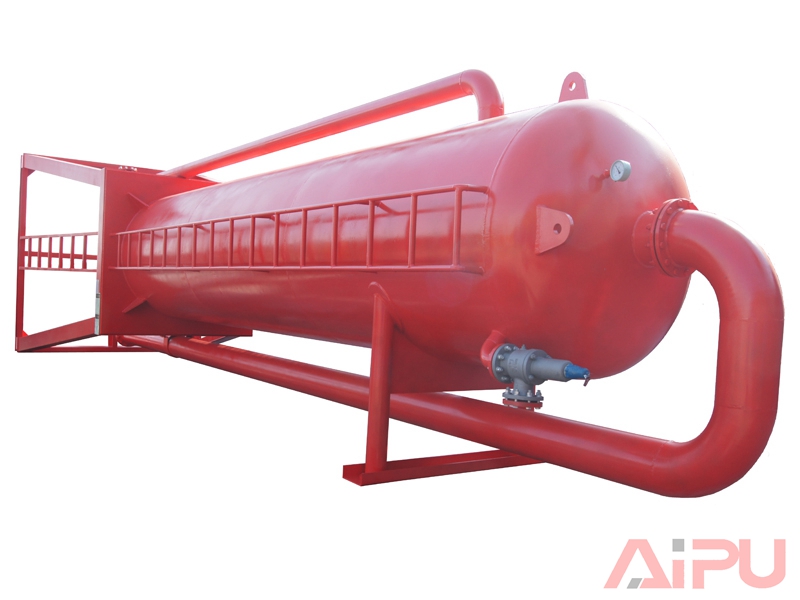 The simplest atmospheric separator is a mud tank that uses gravity separation. With gravity separation, gas rises and escapes; the oil separates from the drilling fluid and rises to the top of the tank. Oil/water
separation can then be carried out with a simple siphon. Several extra
mud tanks are commonly used when there is significant amount of free
oil to be separated from a water-base drilling fluid. The drilling-fluid
mixture may be first passed through a West Texas type of separator
(see the section to follow) to remove the free gas, and then it is sent to the
first of several mud tanks. In the tank sections, the oil is successively
skimmed off with siphons or skimmers, and concentrated oil is pumped
to a shale tank. The drilling fluid is taken from the bottom and sent to
the solids-control system.

Mud tank separators, often used in the southern end of the Austin
Chalk trend in Texas, allow the limited hydrocarbon vapor to escape and
settle many of the solids in the bottom of the skimmer tanks. They are
easy to set up and inexpensive to operate.

A simplified tank separator system is used with some workover and
small drilling rigs. The drilling-fluid/gas/oil mixture is sent directly to an
open tank, normally a frac tank, with the flowline in line with the long
axis of the tank. The open tank then acts as a separator, with the gas
escaping to the atmosphere, the oil and drilling fluid separating, and the
solids settling out on the bottom. Drilling fluid is taken from the bottom
of the far end of the tank, and during connections oil is pumped to
a shale tank.

The basic West Texas separator was developed in the 1950s to drill
the Permian Red Beds in West Texas and is still the ‘‘gold standard’’
atmospheric separator. It is simple, inexpensive, and efficient. It works
best with heavy gas cutting, or with gas/liquid (gaseated) mud. It is
classified as an atmospheric, nonpressurized tank, but some of the tanks
develop from 2 to 5 psi of internal pressure to force the gas to the flare
stack (Figure 1).

There are many variations of the West Texas separator. One system
uses centrifugal separation with a collection tank. Another basic version
uses an impact baffle and a collection tank. One method of discharge is
via a U tube to hold a liquid seal in the tank. Another version uses a float
and valve. Pressure can be held in the tank as a result of the height of the
flare stack, or with a balancing valve on the flare line.

The basic design is so old that little math was ever applied to it, but
engineering simulations/solutions have been applied to confirm some of its actions. Tank sizes vary from 4 to 7 feet in diameter and are generally about 12 feet high, mounted in a frame so that the discharge can be gravity-fed to the shaker. Tank or throughput capacity is a function more of tank and discharge line size than anything else. The original design seems to be have been developed for drilling with 350 gpm of drilling fluid in an 8*3 /4 inch hole while the hole produced 1 to 2 MMscf/day (600 to 1200 scf/m) of gas. Present manufacturers appear to feel confident with values twice as high.

The Super Mud Gas Separator (SWACO SMGSTM), 22 feet high 
6 feet wide, was first used for underbalance drilling in the northeastern
section of the Austin Chalk trend, where there are very high flow rates.
In size, the SMGS may be the largest separator of this type. Capacity is
quoted as 65 MMscf/day of gas or 38,000 bpd of liquid.

One Reply to “Mud gas separator”