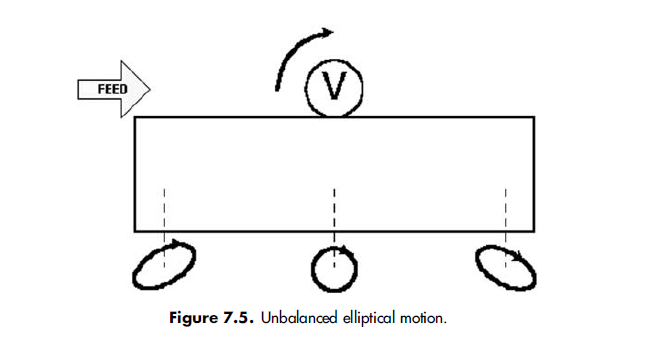 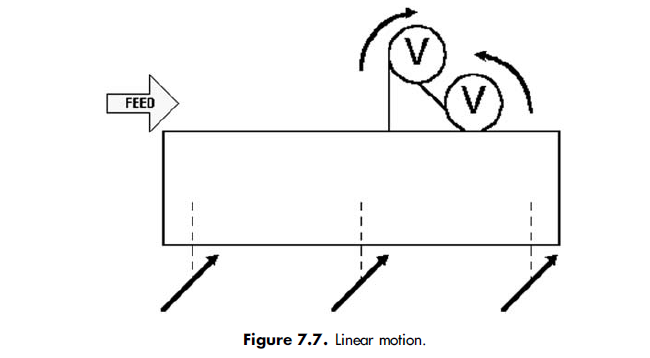 When placed at an angle to the basket, two counterrotating vibrators can produce a balanced elliptical motion (Figure 7.8). 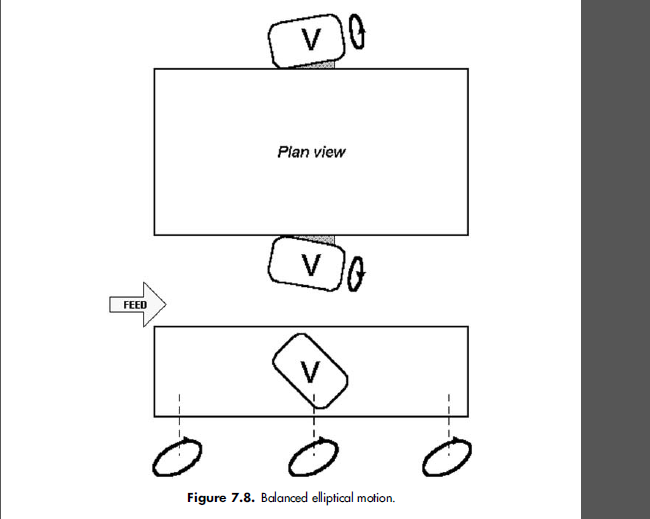 Early elliptical motion shale shakers used hook-strip screens that were manually tensioned. A series of tension rails and tension bolt spring assemblies were used to pull the screens tightly over the support bars to ensure proper tightening. Pretensioned screens and pretensioned screen panels were not introduced until the 1970s and even then were not commonly used on elliptical motion units.
As with most engineered products, compromises have been made. Achievement of an acceptable balance is sought between the amount of feed slurry the shaker can handle and its ability to effectively move solids along the screen deck. The early elliptical motion shakers typically had one screen surface driven by a motor sheaved to the vibrator with a belt drive. Later models of this design employed additional screen area and/or integral vibrators to increase flow capacity. These shakers were
capable of processing drilling fluid through API 60 to API 80 screens.
Unbalanced elliptical motion shale shakers are compact, easy to maintain, and inexpensive to build and operate. They use relatively coarse screens (API 60 to API 80), and for this reason are frequently used as scalping shakers. Scalping shakers remove large solids or gumbo and reduce solids loading on downstream shakers.
2. Circular Motion Shale Shakers
Circular motion shakers were introduced in 1963. These shakers have a single vibrator shaft located at the center of mass of a horizontal basket. A motor drives a concentric shaft fitted with counterweights, which provides pure circular motion along the entire length of the vibrating deck. This feature improves solids conveyance off the end of the deck compared with unbalanced elliptical designs. The circular motion transports solids along a horizontal screen, thus reducing the loss of liquid without sacrificing solids conveyance.
Circular motion units often incorporate multiple, vertically stacked decks. Coarse screens mounted on the top deck separate and discharge the larger cuttings, thus reducing solids loading on the bottom screens. These multiple deck units allowed the first practical use of API 80 to API 100 screens.

Flowback trays (Figure 7.11) introduced in the late 1970s direct the slurry onto the feed end of the finer screen on the lower deck. The tray allows full use of the bottom screen area to achieve greater cuttings removal with less liquid loss. Even with these units, screens are limited to about API 100 by the available screening area, vibratory motion, and screen panel design. If bonded screens are used, screens as fine as API 150 have been used with flowback trays.
Screens on the circular motion units are installed either overslung or underslung. The open hook strip screen is tensioned across longitudinal support members. Both designs have advantages and disadvantages. Overslung screens have reasonable screen life, but the drilling fluid tends to channel to the sides. On underslung screens, drilling fluid tends to congregate around and beneath the longitudinal support members. Grinding of this accumulation of drilled solids between the rubber
support and the screen tends to reduce screen life. To overcome this screen life reduction, rubber supports with flatter cross sections are used and strips are installed between the rubber support and the screen.
In the 1980s some circular motion machines began to be fitted with repairable bonded underslung screens that increased screen life and fluid throughput. Even though the use of repairable bonded screens reduced the available unblanked area, the detrimental effect on fluid capacity was more than offset by the use of higher-conductance screen cloths and larger bonded openings.
3. Linear Motion Shale Shakers
The introduction of linear motion shale shakers in 1983, combined with improved screen technology, resulted in the practical use of API 200 and finer screens. Linear motion is produced by a pair of eccentrically weighted, counterrotating parallel vibrators. This motion provides cuttings conveyance when the screen deck is tilted upward.
Linear motion shakers have overcome most of the limitations of elliptical and circular motion designs. Straight-line motion provides superior cuttings conveyance (except with gumbo) and superior liquid throughput capabilities with finer screens. Linear motion shale shakers generally do not convey gumbo uphill. They can effectively remove gumbo if they are sloped downward toward the discharge end. The increased physical size of these units (and an accompanying increase in deck screen surface area) allows the use of even finer screens than those used on circular or elliptical motion shakers.
Screening ability is the result of applying the energy developed by a rotating eccentric mass to a porous surface or screen. The energy causes the screen to vibrate in a fixed orbit. This transports solids across the screen surface and off the discharge end and induces liquid to flow through the screen.
In conventional unbalanced elliptical and circular motion designs, only a portion of the energy transports the cuttings in the proper direction, toward the discharge end. The remainder is wasted due to the peculiar shape of the screen-bed orbit, manifested by solids becoming nondirectional or traveling in the wrong direction on the screen surface. Linear motion designs provide positive conveyance of solids throughout the vibratory cycle because the motion is in a straight line rather than elliptical or circular. The heart of a linear motion machine is the ability to generate this straight-line or linear motion and transmit this energy in an efficient and effective manner to the vibrating bed. 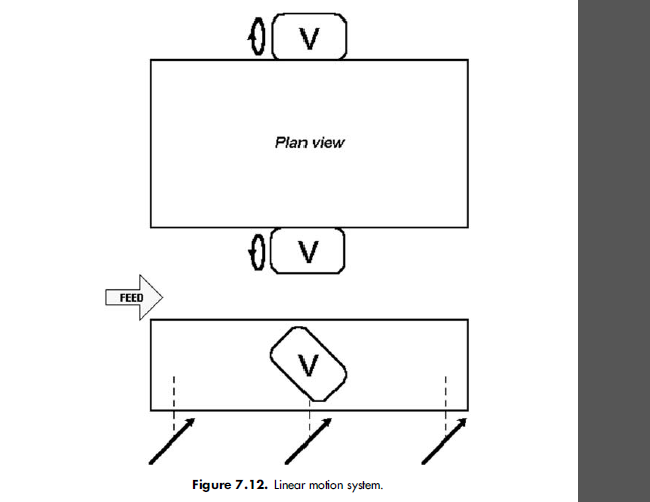 As shown in Figure 7.12, a linear motion system consists of two eccentrically weighted counterrotating shafts. The net effect of each equal eccentric mass being rotated in opposite directions is that resultant forces are additive at all positions along the vibratory trace, except at the very top and bottom of each stroke, resulting in a thrust (vibration) along a straight line—hence, the term linear, or straight-line, motion.
To achieve the proper relationship between the rate of solids conveyance and liquid throughput, the drive system must be mounted at an angle to the horizontal bed. A thrust angle of 90 relative to the screen surface would simply bounce solids straight up and down. Taken to the other extreme, a thrust angle of zero degrees would rapidly move solids but yield inadequate liquid throughput and discharge very wet solids. On most units this angle is approximately 45 to the horizontal.(Figure 7.12).
Some machines have adjustable angle drive systems that can be changed to account for various process conditions (Figure 7.13). If a thrust angle were decreased (for example to 30 to the horizontal), the X component of the resultant vibratory thrust (force) would increase and the Y component decrease. Conversely, building a greater angle would cause the X component to decrease and the Y component to increase. 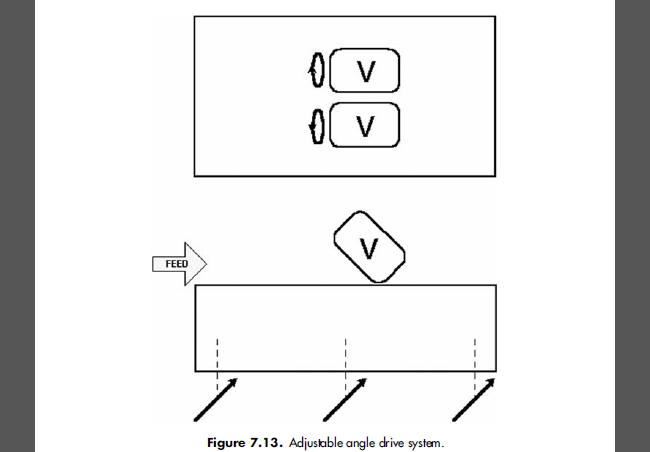 A larger X vector component of thrust will move solids along the deck faster. A larger Y component vector increases liquid throughput and the residence time of material on the screen. Most manufacturers choose a fixed angle near 45, which gives near-equal values for each vector. This is a logical approach, since the shaker must simultaneously transmit liquid through the screen and convey solids off the screen.
The ability to create linear motion vibration allows the slope of the bed to vary up to a þ6 incline (which affects residence time and therefore shaker performance) and to create a liquid pool at the flowline end of the machine. This allows a positive liquid pressure head to develop and help drive liquid and solids through the finer wire cloths. The deck on most linear motion shale shaker designs can be adjusted up to a maximum of þ6. In some cases, the beds can be tilted down to help in cases in which gumbo is encountered. These movements of bed on skid can be accomplished with mechanical, hydraulic, or combination mechanical/hydraulic systems. On some units these adjustments can be made while the unit is running.
The ability of linear motion to convey uphill allows the use of finer shaker screens. Finer screens allow for smaller particles to be removed from the drilling fluid. Hence,a solids-control system that utilizes finescreen linear motion shakers will better maintain the drilling fluid and improve efficiency of downstream equipment such as hydrocyclones and centrifuges. When screens are tilted too much uphill, many solids are ground to finer sizes as they are pounded by the screen. This tends to increase—not decrease—the solids content of the drilling fluid.
When linear motion shale shakers were introduced, other solidsremoval equipment (like the mud cleaner) was sometimes erroneously eliminated. For a short time, this appeared to be a solution, but solids analysis, discards from other equipment, and particle size analyses proved the need for downstream equipment. Linear motion shale shakers should not be expected to replace the entire solids-removal system.
4. Balanced Elliptical Motion shaker
Balanced elliptical motion was introduced in 1992 and provides the fourth type of shale shaker motion. With this type of motion, all of the ellipse axes are sloped toward the discharge end of the shale shaker. Balanced elliptical motion can be produced by a pair of eccentrically weighted counterrotating parallel vibrators of different masses. This motion can also be produced by a pair of eccentrically weighted, counterrotating vibrators that are angled away from each other (Figure 7.14).

The ellipse aspect ratio (major axis to minor axis) is controlled by the angle between vibrators or by different masses of the parallel vibrators.
Larger minor axis angles, or angle of vibrators relative to each other, will produce a broader ellipse and slow the solids conveyance. A thin ellipse with a ratio of 3.5 will convey solids faster than a fat ellipse with a ratio of 1.7. The typical operating range is 1.5 to 3.0, with the lower numbers generating slower conveyance and longer screen life. Balanced elliptical motion shale shakers can effectively remove gumbo if they are sloped downward toward the discharge end in the same manner as the linear motion shakers.
The increased physical size of these units and an accompanying increase in deck screen surface area allows the use of even finer screens than are used on other orbital motion shakers.
In conventional unbalanced elliptical and circular motion designs, only a portion of the energy transports the cuttings in the proper direction toward the discharge end. Balanced elliptical motion transports cuttings toward the discharge end of the screen in the same manner as linear motion. Balanced elliptical motion provides positive conveyance of solids throughout the vibratory cycle.

One Reply to “Shale shaker design -shape of Motion”